Disclaimer:  The author would like to confess that the following events are true, though the names have been changed to protect the guilty.  Also, he admits that some of his favorite dog friends over the last 38 years have been drathaars, several out of “imported blood.”

Wayne was new to the pointing dog game.  He lit up like Christmas when Ava, his sixteen- months- old drahthaar, locked down in a waist high stand of dwarf sorghum.

“Point!” he sang, even though all three of us were in plain view of the stand.   Gun at port arms, Wayne scrambled over to his dog as fast as his senior citizen legs could travel.  Tom, the landowner, and I stood back, guns broken, to let our friend have his moment.

When he reached the dog, Wayne panted to a stop.  “Whoooooa,” he gasped, before switching to variations on a theme.  “WhoUH.  Whooooa, Avie. Good guuuuuurl.”

Wayne eyed the dog, eyed the sorghum, before creeping along Ava’s right flank . Each time Wayne toned Ava’s name, her scent trance wavered.  The dog’s eyes shifted to her man, questions in them instead of predator’s glint. Her stub tail twitched.  Her body relaxed ever so slightly.

Wayne caught the movement.  He turned and hissed “Whoa!,” his palm outstretched like a bad Lizzo dance move.

Ava held, but only on command now, her point having lost all original meaning. Wayne tip-toed through cover just off her nose, head down as if searching for the birds, his hand still up, cautioning the dog.

Ava crouched, took one step, then another to shadow Wayne.   The covey of bobwhites could bear no more choreography.

She pogoed in as every fist-sized head of dark red millet seemed to claymore a buzz of quail wings. The birds poured over a hill before setting wings and careening into a draw bristling with briars, Ava streaming along in their wake.

Horrified, Wayne stumbled after, fumbling for his whistle and shouting, “Ava!  No! Bad dog!  Come!  Come here to me! Aaaaavie!”

“Ava!  Whoa!”  A single flush from deep in the cane briars sparked frantic whistling from the handler.

Wayne nabbed his dog only when she stopped to dig at a ground hog hole.  He came huffing up the hill where Tom and I waited, Ava’s collar fisted in his right hand. Her tongue lolled bloody from a briar cut.

Tom had known Wayne forty years since their days field trialing retrievers.  Wayne and Ava were there on his invitation, Wayne anxious to show off his dog and “maybe get a few tips”.

Tom made no secret of his bias against “off brand“ bird dogs, i.e. those not pointer or setter or long of tail.  He had expressed as much when Wayne had called to crow about his expensive purchase the year before.

“Why, she’s out of imported hunt tested blood,”  Wayne had insisted.  “Her grandsire was certified to have killed fur back in Austria.”

Fast forward a year and a half.  Wayne slipped a lead over the bristle-faced female, as his friend says quietly, “Ya know…that’s a nice pup you got.”

“Thank you, Tom,” Wayne said warily.  A giant “BUT” hung heavily in the bright November air.

“But she needs to trade you in for someone who knows what he’s doin’ if she’s ever gonna make a dog!

“First of all,” Tom sighed, “when Ava started makin’ game you went runnin’ over there with your gun shut like she needed your help.  Trust all that ‘imported blood.’  Just walk over there like you’re going somewhere, not like your hair’s on fire. You can close your gun when you’re ready to do business.

“Next thing: When you got to her, you went on point!” 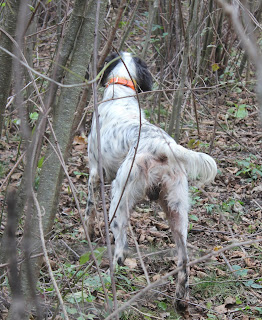 The old man paused to listen as a flock of geese lifted from the impoundment south of the farm.  “Back there was a set-up. You had a perfect chance to come in wide, circlin’ in front then angling back in toward your dog. Sometimes that helps set the birds.  For sure it helps the dog hold her water.” 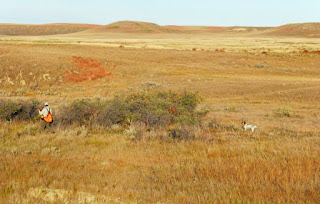 Our host half laughed, half snorted.  “Keep your head up so you can see, your gun up so you’re safe, and your feet moving.  You got one job: get those birds in the air while the dog’s still standing there.  Instead, you went creepy-mousin’ past her like some kinda Elmer Fudd.  You’re a magnet then, pullin’ that dog in there with you.

“And for God’s sake,” Tom begged,  “stop yakking at that poor dog while she’s on point!  What if the birds have run out on her, or she’s pointed a box turtle or an old quail roost?  Now you’ve reinforced a false by whoain’ her… on what?  You don’t know!

“If Ava breaks, it’s nothin’ but another chance to teach.  Go get her.  Walk her back.  Set her up where she pointed.  Make her stand there for a bit, then heel her away from the direction the birds flew.  Reminds her that we’re workin’ together here.  Get her lined out with the wind and go hunt singles.”

Tom hitched the little Superposed up over the arm of his chore coat and grinned wat his chastened old friend.  “One advantage o’ those Cont’nental dogs,” he deadpanned, “is sooner or later they’ll get to diggin’ at a coyote den, or tree a squirrel or drag down a wild boar or somethin’.

“Makes ‘em easier to catch.  I ‘magine you just grab hold o’ that stub tail and hang on.”

Posted by Firelight Reflections at 2:23 PM