"How do you choose the sire for your litters?"   As a very small breeder, just one, maybe two litters a year from my personal gundogs and pets, I am often asked this question.  I wish I had a good answer.  Well, in my mind they are all good answers but in reality there  are about as many answers as I have litters.

Take, for example, my litter from last summer.  In January 2018 I attended the RymanSetters.com Breeder Gathering in Kansas.  The Gathering days are filled with daily hunts on wild quail with evenings of lively group dinners, discussions, and a lot of fun.  Breeders often get together for hunts for the collegiality but also the opportunity to see each others dogs hunting.  One day in particular that week I hunted with fellow RS breeders Bob Mele and Walt Lesser and we put down my Sally and Bob's two females, Lizzie and Abby.   Those 3 dogs were nearly indistinguishable as they skirted the edges of the cover, hot footin' it to hit likely spots on the horizon and weaving in and out of every pocket on the section.  Although that particular cover was not terribly productive for birds, I was highly impressed by Bobs dogs and discovered that they were aunt/niece.  Two days later I hunted with Doc, who was Abby's sire and Lizzie's brother, and as I watched him hunt and then at the end of the hunt, lie down and relax on the sunny hillside next to his owner, I knew that I had found the sire of my next litter from Mustang Sally.  My Annie is the product of that pairing and at only 12 months old that little spitfire gal has the world rolled up and waiting with red carpet. 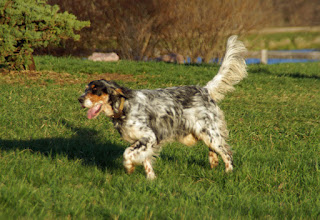 My current litter was in the plans for a long time. Years.  The sire is a son of my favorite ryman (yes, I know we are not supposed to have favorites but Tweed was exceptional so I will make that exception) and when I met Parker and his owners for lunch 5 years ago at Parker Pie in Vermont for pizza (an absolute must stop each visit back east) I was taken aback at how Parker was his mother in male form: The look, the personality, the character, the bird dog, the quality.... unmistakable.  Plus, he is the brother to my outstanding bird dog, Storm. 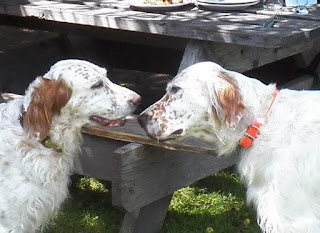 I knew that day that I had to get a puppy from Parker.  Nearly 4 years ago I sent a photo of a 3 week old puppy to Parker's owner, Ken and said that I finally had the right female to breed to Parker so the boy had better keep himself prime.  That baby pup was my Kate and I knew from the beginning that she was a special keeper and that she was the right match for Parker.  The plans were set for 2017 but a family emergency suddenly made Ken and Parker unavailable when Kate was to be bred so I bred her to another lovely male and those pups have been precocious and oh so pleasing.  But I still wanted my Parker x Kate litter.  An accelerated sale and move from my house in Kansas this April had me stretched thin  and of course, that is when Kate came into heat.  So the movers and my household headed to a storage unit in Michigan while Kate, the rest of the pack and I headed to Cape Cod.  Our timing was perfect. We got two breedings, I filled up on fresh seafood and then we were headed back west, this time aiming for northern Michigan where I needed to shop for and buy a house in time to deliver the pups that I knew were coming.
Kate                                                                         Parker 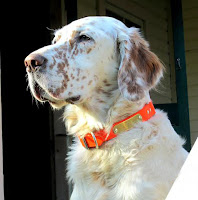 I moved into the new Grouse House on a Saturday, built a whelping box that Monday and welcomed the 8  Kate x Parker puppies that weekend.  They are only 4 weeks old now - my favorite age - but already I can see that yes indeed, these pups are what I thought they would be.  It took me 9 years to get to you Parker buddy, but it looks like you sure made it worth the wait. 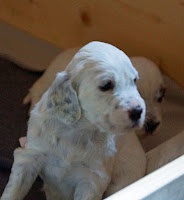 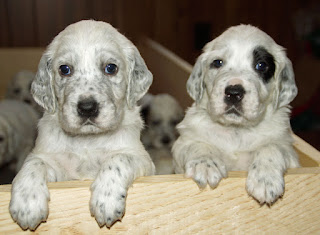