Our Kansas Season: Part I, So Far

It is hard to believe that we are already 5 weeks into the Kansas bird season.  It has been a good one with dogs and birds yet a bit unusual since in the early weeks I was pretty much homebound with the new puppies.  So until very recently Mike has had to hunt alone much of the time and when he and the dogs get home I enjoy sitting and hearing his stories of the day: the habitat, dog work, birds, and adventures.  The following is a sampling of those hunts.  Oh, and he has recently started carrying the pocket camera so I can better "see" the stories.

Our opening day was a mix of fun and fright.  We took Tweed, Storm and Jazz out to a favorite cover.  They found 3 nice coveys of quail, the dogs got feathers in their mouth and I broke in my new 28 ga shotgun.  I love carrying that little gun.  But about halfway through the hunt it was obvious that Tweed was feeling poorly so we returned to the truck and went to the vet.  She rebounded well after that day but it was only days later that we discovered she had a tumor and we lost her.  I will treasure that last hunt with her and wish I had taken more photos that day. 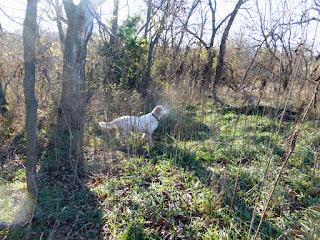 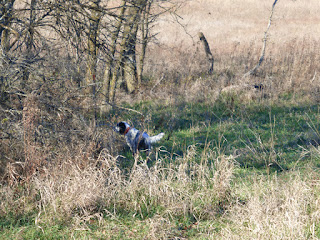 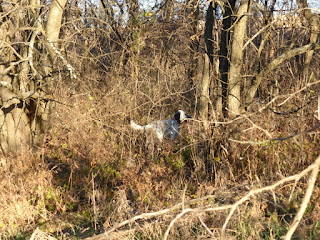 The next day, Sunday, I stayed home with Tweed and Mike went out alone, taking Jack and DW.  As he pulled into the cover a quail flew past the truck: a Judas bird.   As Mike and the dogs stepped away from the truck quail started flushing up from the grass like popcorn.  By 10:00 they had found 3 coveys and Mike had 5 birds in the bag: the "L" word was out there....Limit.  The "L" word is a joke between us and a couple of good friends: talking about Limits is a jinx so it's referred to as "L".   He ended up with 2 roosters in addition to 7 quail: the "L" was elusive that day but they had a heck of a lot of fun regardless.

If Mike had dropped the quail that Jack is pointing in this photo, he would have had his limit of 8 quail for the day. 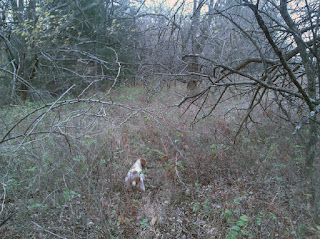 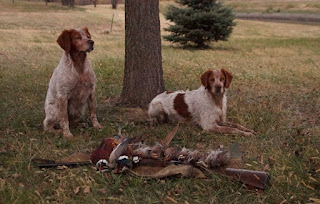 Bobwhite quail are often referred to as Gentleman Bob but they sure don't play by the rules.   It might surprise some to hear how far they will sometimes run.  One day as they worked singles, Belle trailed a bird almost 200 yards, only to spin around and begin trailing back.  Sure enough, the bird had tried to pull a fast one on her but she pinned it back almost where the covey had originally flushed. 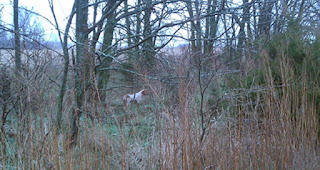 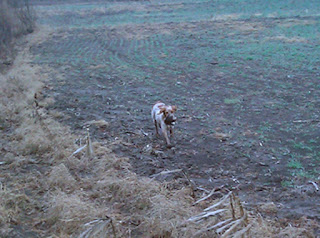 Bobs will also often be found in the nastiest brush and cover possible.  Dogs on point sometimes cannot be seen until a second dog winds them and backs them as they pass.  One day Jack pointed birds buried in downed trees.  Mike bulldozed his way into the brush to flush the birds.  When he shot, the bird dropped on the far side of the draw and Mike watched as Jack climbed up and over downed trees and brush and then climbed back with the bird in his mouth.  Mike looked around for DW and discovered he had been on point a bit up the draw.  The targeted bird sailed over the beaver pond and DW manuered downed trees and swam across the pond to find the bird and return it to hand.  So much for gentlemen!  That same day Jack went on point out in a field with fairly short grass.   After crawling under a taut new fence  - and tearing his brand new vest - Mike looked up to see Jack still on point.  He walked in and was pleasantly surprised by the flush of about 20 prairie chickens!  A special treat, especially for so far into the season.  Mike dropped one and wished his second barrel was working as he would have had an easy chance at a double but had to just watch them fly off. 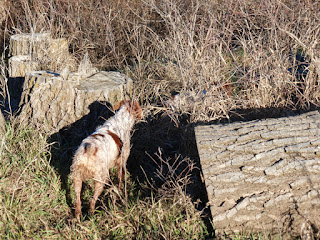 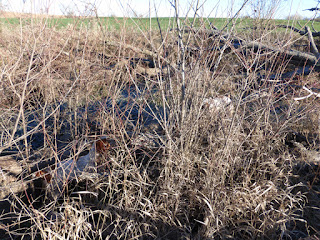 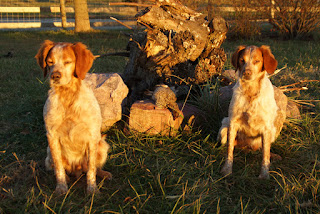 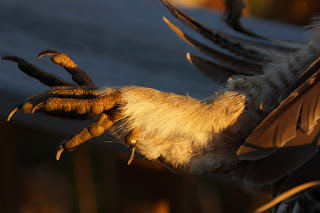 
Posted by Firelight Reflections at 1:54 PM No comments:

Just a quick update on Sally's puppies.  They are 4 weeks old now, plump and beautiful and getting sassy.  We have just one male puppy available at this time to a good hunting companion home. 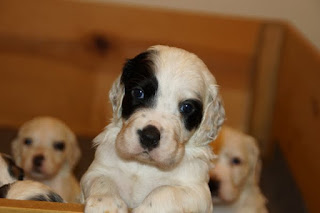 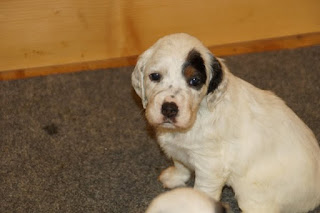 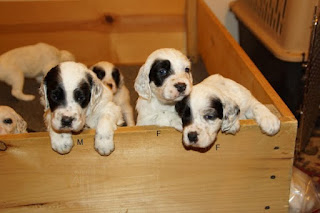 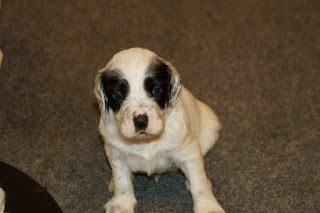 Posted by Firelight Reflections at 10:20 AM 2 comments: