Wrath at the Grapes

Location, location, location.  Indeed the reason why I bought this particular property back in early summer. The location is rural, private, away from any towns and a walk out the front - or back - door puts me and the dogs into grouse habitat.  With a garage, a barn, big mature trees and a couple of private acres of yard surrounded by woods it's a pretty nice place to have a pack of dogs.  First order of business was to have most of the back yard fenced in for the dogs as my pack enjoys spending good weather days out there doing, well, whatever it is that dogs do. Run. Dig. Lots of digging, motivated by mole trails through the yard which as a result has parts of the yard looking like Fort Grayling Camp did mine field practice here.  Bark. Lots of barking because for the first time in their lives my dogs can see a road from their yard and having grown up without seeing a road, they believe that any passing truck is actually in our driveway and therefore must be announced.  We're working on that. Also within the yard there is a lovely arbor with a swing beneath. I can picture the former owners sitting there in the cool evenings, enjoying the flower plantings that my dogs have been umm, shall we say re-arranging. 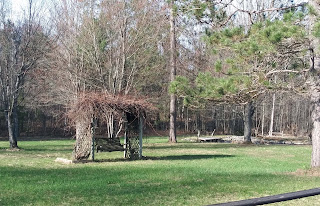 The arbor has nice old grape vines woven onto it and friends stopping to see my new place frequently commented on how come autumn I would be seeing grouse flying in at dusk to dine on the grapes as well as to the apple trees further over.  It has been a wet summer and the vines took off and grew. And grew. They grew so much that I had visions of Jack and the Bean Stalk.  They completely covered the arbor, nearly blocking the swing from view and I wondered if the old arbor was strong enough to bear the weight. Part way through the summer I noticed grapes developing on the ends of the vines that were peeking out from the leaves.  It was around then that I also noticed some of the dogs spending a good amount of time around the arbor and suddenly it hit me: the dogs were eating the grapes.

A voice in the back of my head shouted that grapes are toxic to dogs and sure enough, a quick Google study came up with a thousand pages warning of the toxicity of grapes for dogs and horror stories of dogs dying within days of consuming them.  All I could think was to block the dogs access to the vines so quickly disassembled a chainlink kennel in the garage and erected the panels to surround the arbor to block the dogs.  So now there was a somewhat bizarre looking chainlink stockade within the yard containing not dogs, but instead wild and wooly grape vines that grew and grew.  I decided that come spring I would build an attractive wood fence around the arbor to preserve the sweet little spot in the yard. 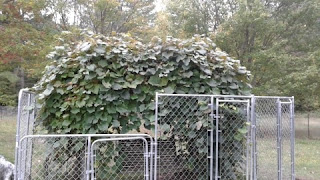 When the first heavy frosts hit this fall and the grape vine leaves dropped I was shocked to see that the arbor did not just have some grapes for the neighboring grouse, it held hundreds of pounds of ripened grapes.  They smelled delicious even from afar and the dogs were digging and doing their best to get at them.  A shout out to the community got no response from anyone perhaps interested in using them for jelly or wine.  I am pretty domestic in the kitchen but my interest in wine is limited to drinking it from a glass. 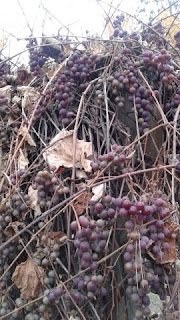 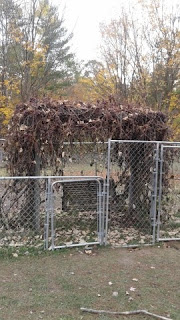 As the grapes ripened further they began to drop to the ground. Most stayed safely within the mini-compound but some would inevitably bounce out through the fence and I could see the dogs frequently shopping around, nose to the ground.  So began a several-times-a-day routine of doing a "grape check" around the arbor before I could let the dogs out.  It's a good thing for a private, rural location... nightgown, tousled hair, boots and jacket were my morning wardrobe and duty of the day with rake in hand.

The grapes are now turning mushy and are dropping in large quantities.  Today's duties included getting inside of the grape hoosegow and beginning to hand strip the grapes from the vines in an effort to keep them contained.  As I moved around within the stockade and was squishing purple from beneath my rubber boots I had flashbacks to an old "I Love Lucy" episode where for some forgotten reason she and her friend were foot-stomping grapes. Only there was no laugh track for me, instead all I could hear was an oft heard mothers lament of "this is why we can't have nice things." 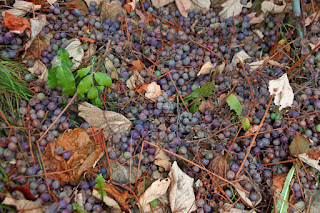 The fanciful thoughts of pretty picket fencing around the arbor are gone. Replaced by vengeful fantasies of taking a chainsaw to the whole thing come spring to remove this doggie-biohazard from what was supposed to be a doggie sanctuary.  It will be sad to remove something that would bring pleasure to some others but this is my Grouse House and it is too much of a risk for my Firelight grouse dogs.  As an old friend always says.... darn dogs anyway.

I ironically toast the day with a glass of wine....   Cheers.
Lynn Dee
Posted by Firelight Reflections at 6:30 PM No comments: