Water Therapy.  Well, that’s what the vets call it.  We call it swimming and having fun.  After the open wounds had healed on Dee's broken leg we were able to begin his physical rehabilitation.  Having been confined to a leash or crate for a long number of weeks he was out of shape and needed to begin exercising the injured leg to prevent loss of motion with it.  Swimming was recommended and has been easy to do since we have been living in a cabin on a lake all summer.  Fortunately Dee loves to swim and also loves to retrieve so the rehab work has really been play for us all.
- ld
(click on any photo to enlarge it) 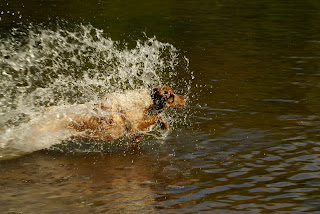 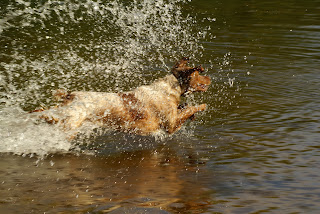 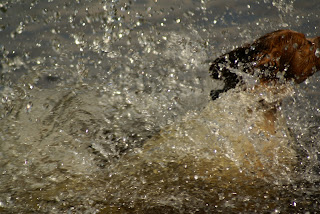 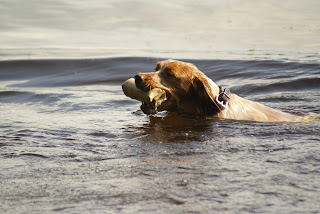 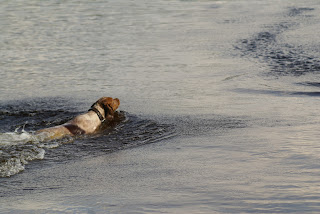 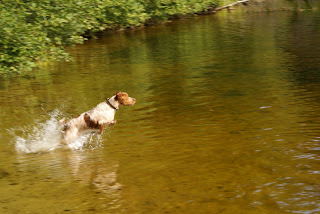 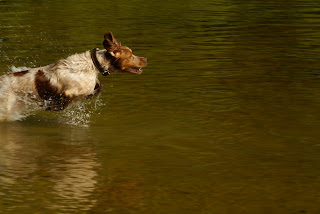 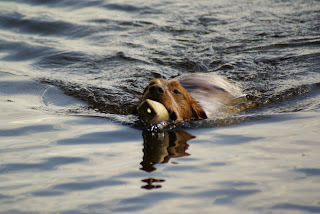 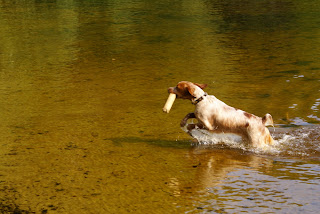 Posted by Firelight Reflections at 7:07 PM No comments:

Dee is a 20 month old French Brittany from a breeder in Kansas.  He hunted full time last year as a pup.  His first point was on sharptail in Montana: when he stood steady and watched the bird flush as Mike snapped photos, Mike knew he had another good one on his hands.  Mike put the camera away and an hour later shot a double of sharptail over another of Dee’s points.  Dee showed himself to be the best natural retriever Mike has owned and he seems to have a particular talent for finding and holding quail.

This past May Mike was camping in a remote dog training area in NW Kansas and Dee was hit by a car whose driver was joy-riding around the grounds.  He suffered multiple fractures on a front leg with serious injury to the foot pads.  Surgeons at Kansas State Vet Hospital screwed a plate onto the bones and he spent 2 weeks in emergency care.  After some difficult weeks of careful care with us Dee has now recovered but at the advice of specialists he is scheduled to have the plate removed on Sept 24th to avoid further infections.  This will keep him from hunting most or all of this season but will hopefully make him sound for the many years of hunting ahead of him.
(click on photos to enlarge) 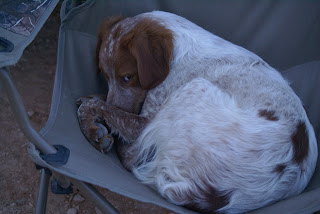 Storm is a 2 yr old ryman English Setter, a 5th generation of Lynn Dee’s breeding – Tweed is her mother.  Storm is an athletic, leggy gal with lots of footspeed.  She works close in heavy cover but easily ranges out 200 yards in the open.  She shows a good nose and intensity on point.  Storm is a playful, affectionate dog and loves to get into trouble with her buddy, Dee. 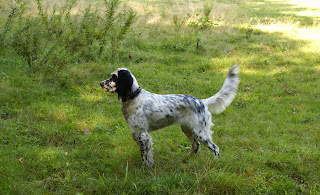 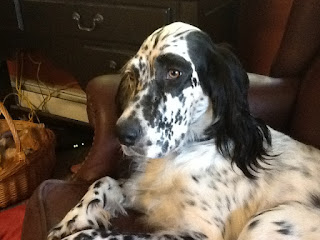 Meet the Dogs, Part I: The Varsity Team

Our pack of dogs consists of 7 dogs: 4 English Setters ranging in age from 2 yrs - 13 yrs, 2 French Brittanys ages 1 & 3, and a 13 yr old rescue Mini Daschund.  They all get along easily and share time in the house.  They break down nicely into pairs or braces for hunting.

Today we will introduce the Varsity Team, Tweed and Jack.

Jack
Jack is a 3 yr old French Brittany.  Mike was fortunate to be able to buy him at the age of 4 months from a breeder in Kansas.  Just 3 months later Jack was being hunted full time with the adult dogs.  At 7 months he staunchly pointed his first covey of quail and Mike shot a double over him.  And it just keeps getting better.  Jack is a complete natural birddog: a hard charging hunter yet very biddable and obedient; his range is from 40 -200 yards, depending on cover and conditions; he points and backs with intensity and will hold his birds as long as it takes for Mike to get there to do his part.  Around the house Jack is a serious fellow and particularly devoted to Mike.
(click on photos to enlarge) 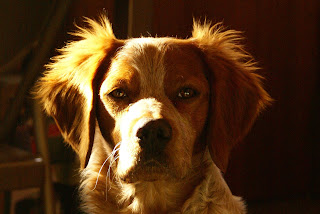 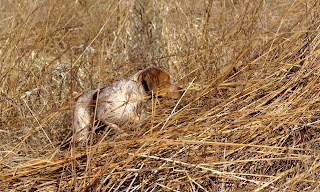 Tweed
Tweed is a 6 year old ryman English Setter, bred by Lynn Dee.  She is a very responsive, light-footed dog who developed early into a fine ruffed grouse dog.   Tweed demonstrates several of LD’s goals in her breeding with a faster, more animated ground speed and good intensity and tail on point.  Her range is typically 30-100 yards and she is naturally staunch on her birds.  Around the house Tweed is very affectionate with lots of personality – she is one of those dogs that makes everyone want to take her home. 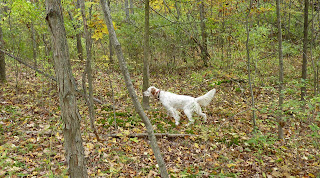 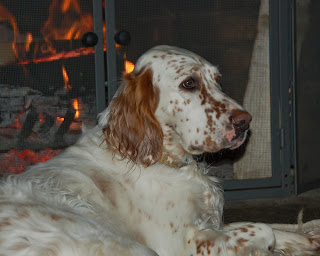 All dressed up and nowhere to go.  Describes how I am feeling right about now.  This fall promises to be filled with sharptails and huns in Montana and pheasant and quail in Kansas.  The hunting rig is complete: F250 crew cab diesel with a 6-hole dog topper pulling a 30’ Open Range travel trailer.  But for now the rig and the two of us are just sitting here, biding our time in hot, humid Maine (who the heck knew that Maine was so humid?!)

Summer has been busy. With good.  And bad.  We ate so many lobsters that we are tired of them.   We had lots of visitors – I never knew that so many friends came to the Maine coast to spend a few days.  We had a couple of great rib BBQs with friends old and new.   We lost a wonderful old gentleman of a setter.  We endured surgery on one of our prime-time hunters and an erhlichia infection with another.  Our youngest dog has recovered from his hit-by-car trauma but specialists now tell us that the plate/screws should be removed for long term health.  He first needs more healing time so his surgery is scheduled for Sept 24th at Tufts University in Massachusetts. We will be pulling out as soon post-surgery as we can.

Meanwhile, we will take the rig out for some short stays to learn the ropes with it.  Dogs will heal.  Temps will cool down.  And the itch will become stronger.

Posted by Firelight Reflections at 11:50 AM 3 comments: