Let me begin with an apology.  I have been derelict in my blogging.  A number of readers have let me know that they have been disappointed in the lack of posts here, I feel badly about that and to remedy the situation I now have several posts lined up to publish to get everyone caught up.  In a bit of self defense, I do want to state that much of the reason that I have not written is because we have been busy:  when we are on the road in Montana we hunt several days a week and care for the pack of dogs whereas hunting out of the house here we have both of those plus running a household, visitors, holidays, and a tiny parttime job, which does not leave a lot of time for writing. 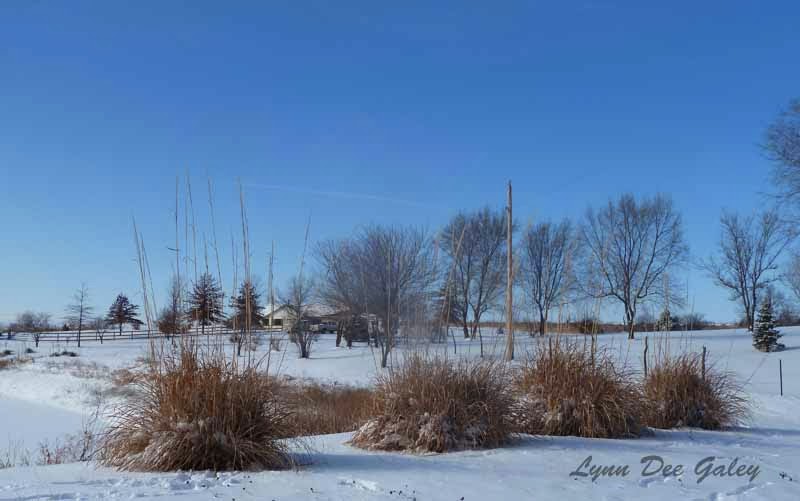 The Kansas hunting season ran from Nov 9 -Jan 31.  We opened the season with a bit of skepticism given that last year the bird numbers, especially pheasant, were down so significantly due to the drought.  So we decided that we would focus on the bobwhite quail this year since they are native to the area and therefore better equipped to handle weather extremes: they have been here a long time and hopefully will continue to be.  We were not disappointed.  Most of our hunts were day trips where we would leave the house in the morning with a lunch packed and we would be home by late afternoon, tired and usually with birds in the bag.  (as always, click on any photo to see it enlarged) 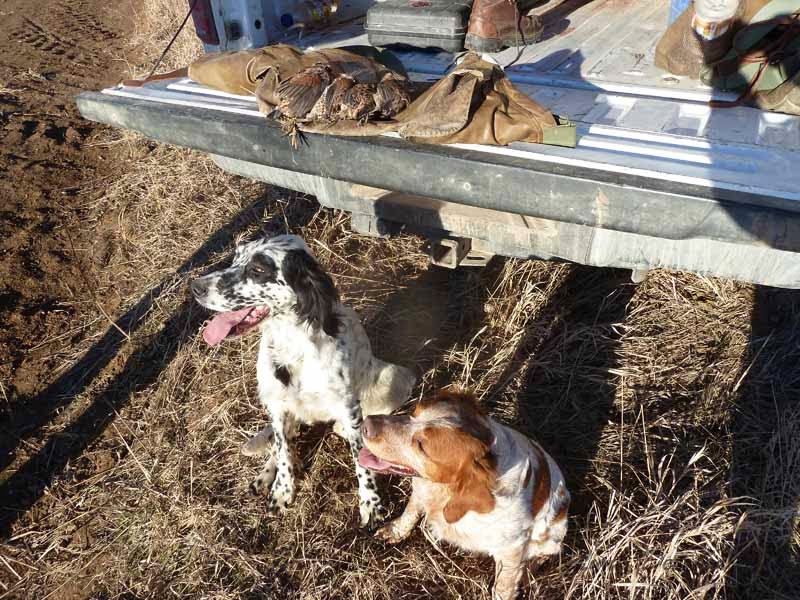 Quail are found in brushy areas, typically along either crop fields or tall grass fields.  To this New Englander, some of our local quail habitat reminds me of the old, overgrown Vermont farms where I loved to hunt ruffed grouse.  Coveys are found along the edges of fields or even feeding out in fields and once flushed, the singles fly into brush and treed areas or tall grass, the thicker the better.  The dog work is closer and requires more brush-busting than Montana or Kansas fields for pheasant so we usually ran just 2 - 3 dogs at a time.  The dogs did great with each one showing their own strengths and skills.  And of course being dogs, weaknesses too, but they were minor and we forgive them just as we hope they forgive us when we are less than perfect.  You have to look hard to see the dogs in some of the pics due to the cover.


Dee holding them tight til we get there, Jack backing 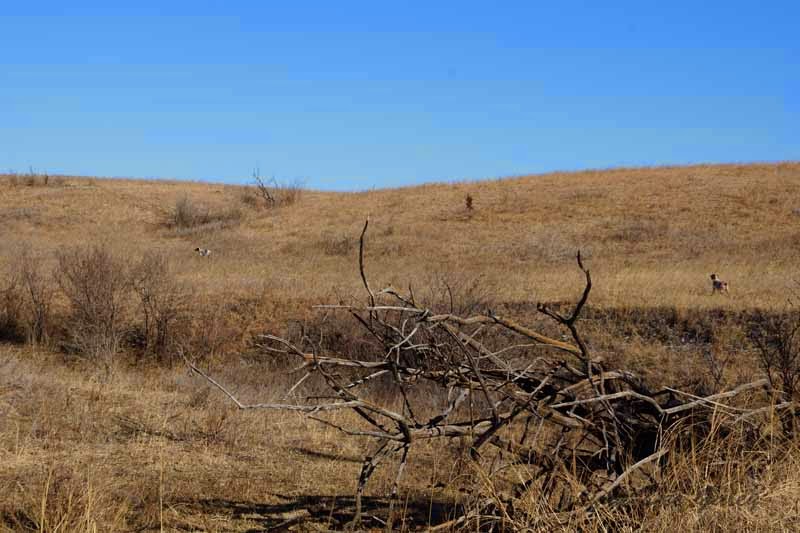 There are actually 3 setters on point/back in there 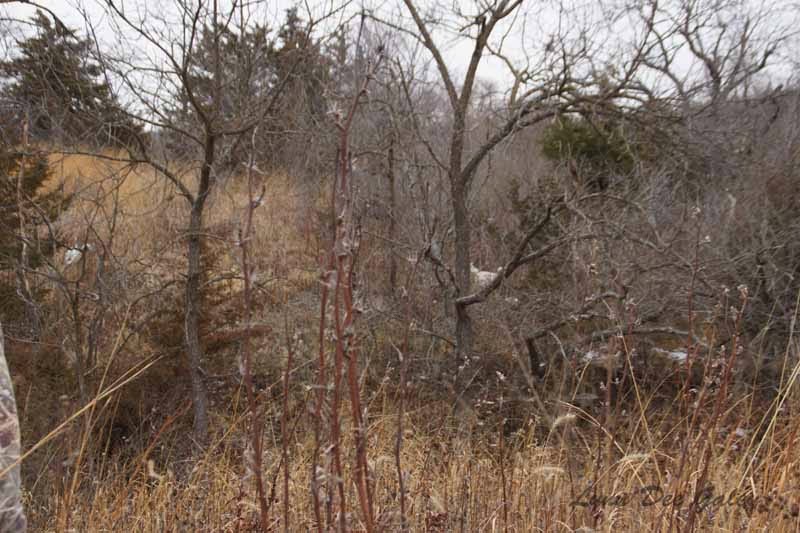 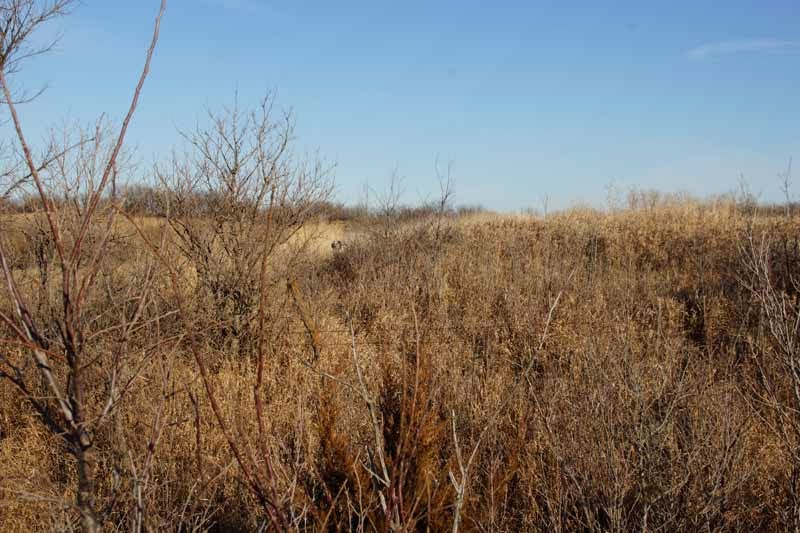 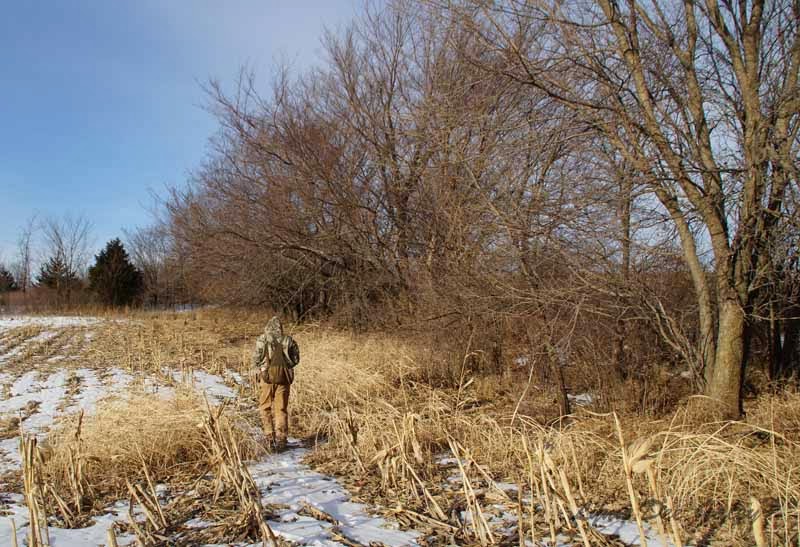 Me walking in on a point with 3 other dogs backing 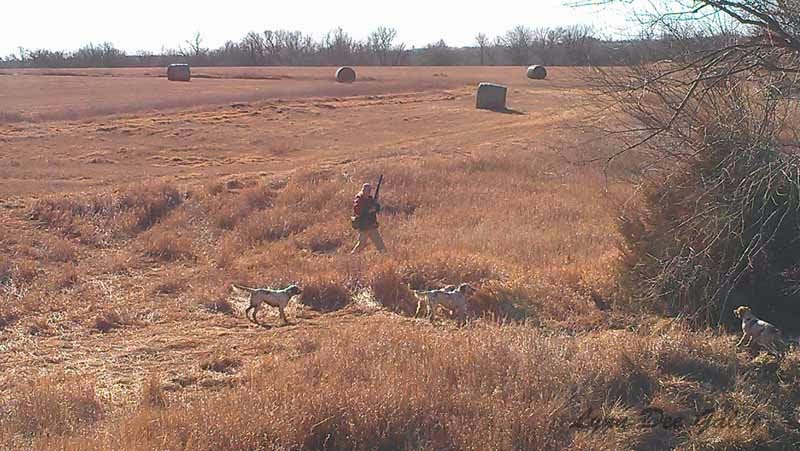 I have so many photos from the season that I want to share, there will be more in the promised subsequent posts. But I do want to share photos and memories from our opening weekend because it was special to us. The day after the opener we were thrilled to be joined by both Mike's son, Colt, and our wonderful friend, Jess, from Texas.  Colt is a busy engineering student at K-State and this was the first time in over 2 years that he has been able to come along for a hunt.  He and his Dad walked and talked all morning long. 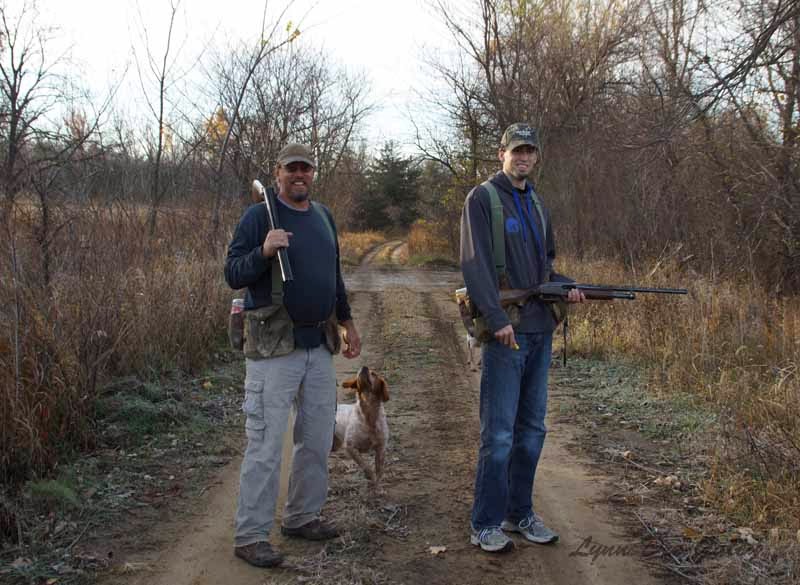 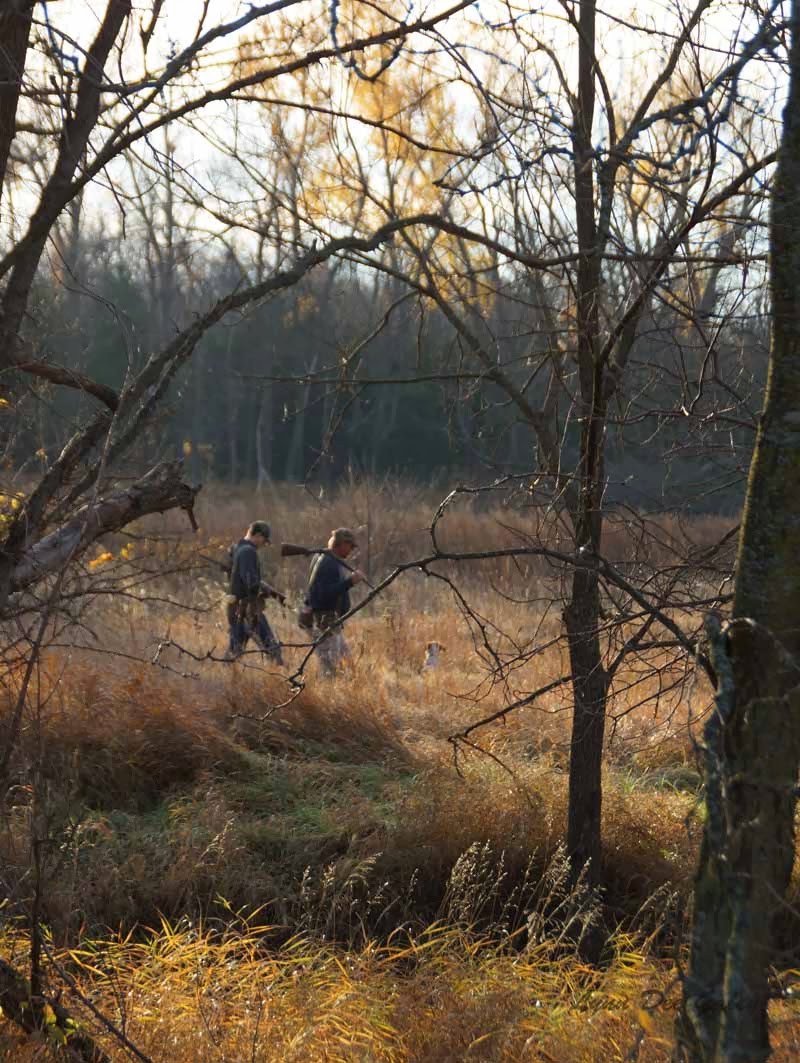 Mike has now hunted with Jess for a few years and we were really looking forward to his visit and hunts this year.  Jess makes the long drive up from Texas in search of bobwhite quail, once plentiful in Texas.  He has 2 very well mannered dogs, a Vizsla, Lu, and a Drahthaar, Ilse.  One of our favorite memories of his visit this year was a time when Jess dropped a rooster for which Ilse ran in for the retrieve as did Jack and Dee.  The boys love to retrieve and assume all birds are theirs but Ilse reached in, picked it up and as she lifted it over their heads the look on her face made it very clear that this was her owners bird and the boys had better back off....and indeed they did, giving us all a laugh.  We had a lot of fun but with an abrupt ending as Ilse tore a large gash in her leg on barbed wire which laid her up for a week or so but she healed fine. 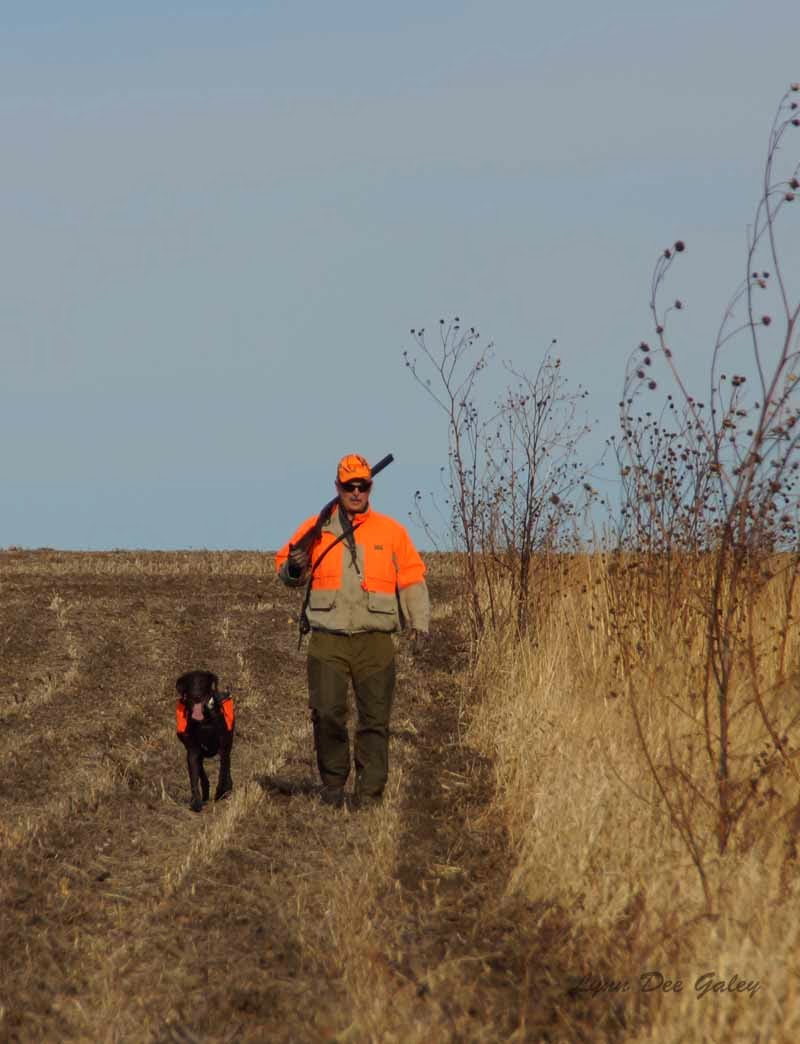 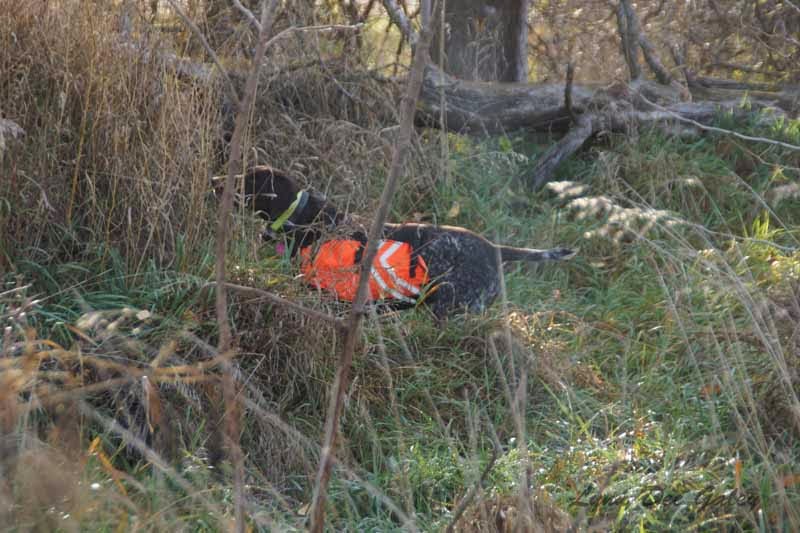 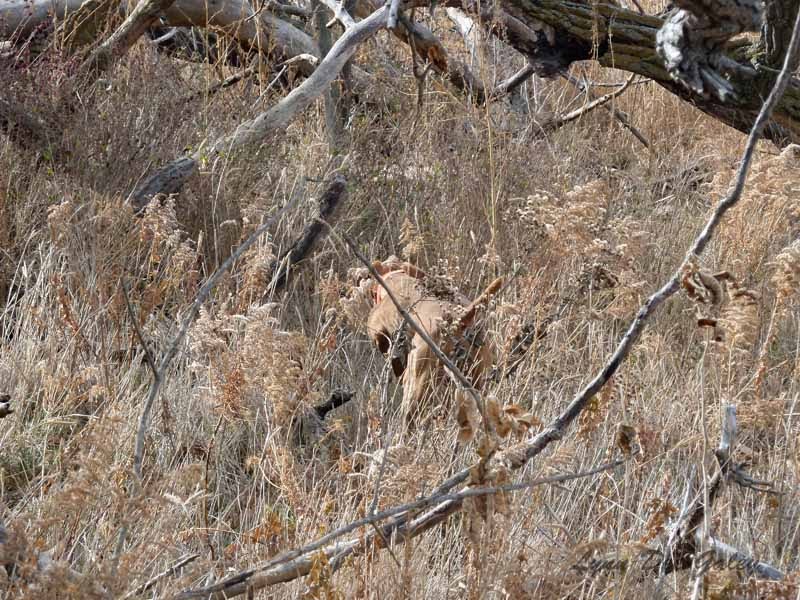 (The above pic of Lu is actually from last year, somehow I failed to get any good pics of her this year but love this one of her and figured it bore repeating it.)

Weather this winter has been unusually cold and snowy for this area.  Most winters any snow melts within a few days but this year it stayed.  To reduce the stress on the quail, we didn't hunt them on days with bad weather or really low temps.  Surviving and avoiding wild predators takes enough of their energy, they didn't need us bothering them on those days.  Right up to the end we saw reasonably sized coveys and big, healthy birds with fat on them so we hope that they come through the winter well. 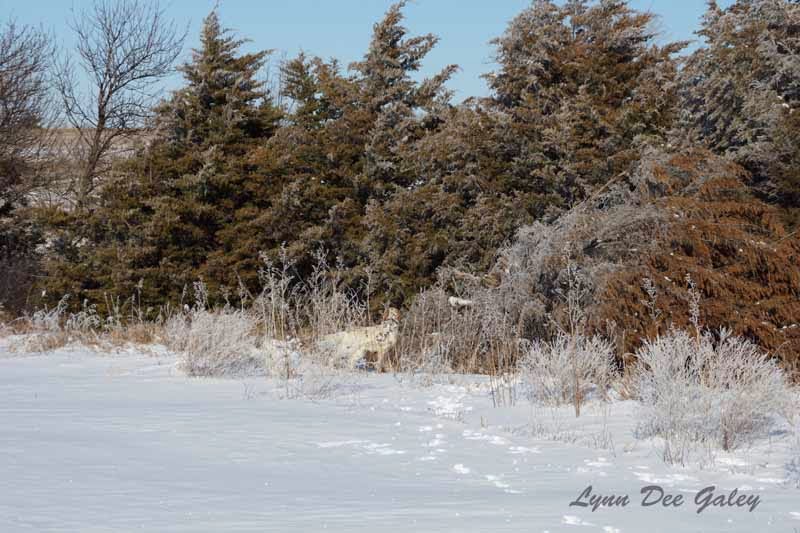 Posted by Firelight Reflections at 7:22 PM No comments: