We are now in Minnesota, having left Montana a couple of days ago. We had a lot of fun during pheasant season there. We don't go up to the area of the state where the phez are released, instead we get a kick out of scratching down what a friend has nicknamed "badland pheasants." These areas may/may not have phez but they also still hold sharpies and Huns so when the dogs go on point you're never sure what they have.

This is our "Buck Dog" cover. Yeah, this grouse hunter has gotten prairie-hunting Mike naming covers along with me. Lol

Storm had a rooster on this point.

Belle trailing a rooster. She turns 2 in Dec and this fall it was pretty exciting to see her show some pretty advanced ability in trailing and pinning running birds like groups of Huns.

Mike was walking the high edge of this coulee, I was covering the bottom. Tweed was backing Storm (hidden in the brush) who was pointing Huns.

From a couple of hundred yards back had seen Jack drop down into the draw and not come back out. When we saw DW stop on a back near that spot we knew Jack was on point.

Jack was hard to see from my side of the draw.

When we walked in two roosters flushed and we each dropped one. Sort of a couples double? Lol. Storm was happy to do the retrieve on one, the boys got the other.

Jazz is our youngest dog, just a year, but she gave us some very nice bird work. And man, can that little dog go! We had been concerned that we would have trouble seeing her because she is so small but it turns out that her black head is pretty easy to see in all but the tallest of grasses there.

Right now we are boondocking not far from where we will be meeting a friend and doing some hunting for ruffs. I'm looking forward to hunting the woods but love the prairie too and feel blessed to be able to do both.

Posted by Firelight Reflections at 10:53 AM No comments:

Every Dog Has It's Day

"I wouldn't take $5000 for that dog."   That and a smile on Mike's face met me as he and Fr Brit, Belle, returned from their morning hunt.   We had headed in separate directions earlier this morning, me with our youngest Fr Brit, Jazz, and Mike with Belle.  I had taken the little tri-color up through a draw to do some training on the sharpies I expected to find and we had enjoyed a good hunt, accomplishing some training goals along the way.  While Jazz relaxed on the sofa, Mike shared the details of his hunt.
Jazz 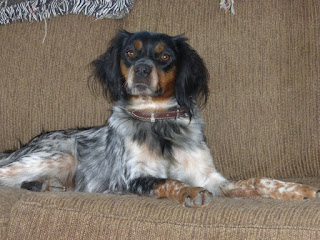 Belle had stolen the day with some outstanding bird work on Huns.  I really need to get Mike to carry a camera but without pics to see I listened to his report of how she had nailed coveys of Huns and singles and even better, how she had put on a trailing show to remember.  Huns can run like perhaps no other gamebird and she was able to trail them over and around the hills of their escape, slowing down and stalking as she got close.  Last year we knew she was going to be special but we had also been prepared if this year she had shown us the "terrible twos."  Instead she just keeps getting better and better.  You go girl.
Belle 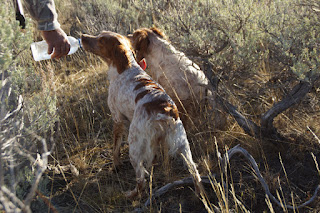 As usual, we are camped out on the prairie near where we hunt.  In fact, this morning we walked out the door of the OR to our respective hunts.  I took this photo from a small hill this morning looking back - the OR is a tiny dot in the pic.

We have come into town this afternoon to get some phone and internet service and get caught up on some correspondence.   We are treating ourselves to burgers and a beer at our favorite bar and grill  A parting photo is one I took yesterday.  After hunting for miles, it is always a welcome sight to come over a hill and see the truck not far away.  Happy hunting all. 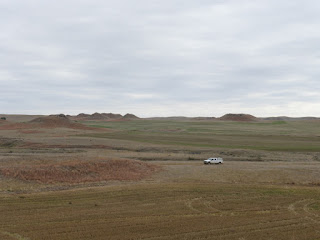 Posted by Firelight Reflections at 6:59 PM No comments: