Well, maybe not 101, but next week this little cabin is going to be pretty full of spotted-dog puppies. More formally known as English Setters. And actually, they are born snow white and their spots don't come in for several weeks and until they are adults. But we will be busy with a bunch of little cuties.

We had bred Tweed back in December, doing a repeat of a breeding that produced some awfully nice pups. We had planned to keep 1 or 2 for ourselves for possible breeding in the future but also to make sure we have enough dogs in the fall to be able to rotate dogs and keep everyone in top shape. From the beginning we thought that Tweed looked and acted like the breeding did take. But about 3 - 4 weeks into the pregnancy her appetite died back and her 'waist' looked small and trim. After a week or so Mike and I admitted to one another that we each felt that she was not pregnant after all. Perhaps she had resorbed the litter or perhaps had not been pregnant in the first place.

We were so disappointed but decided that this would be an ideal time to bring in that fresh blood via a female from another breeder, to later be bred to one of the nice males I have out there. So for the first time in over 20 years I bought a puppy. She is a tri-color belton and her pedigree is a lovely blend of old and new. She is about 7 weeks old now and will arrive next Monday as a carry-on passenger with friends as they fly back to NH after visiting with their son.

But meanwhile, Tweed has pleasantly surprised us by ballooning out and leaving no doubt now that she is indeed pregnant. I guess we fell for the ole mid-semester doubting, we are both experienced with breeding but she fooled us. So a day or 2 after the new puppy arrives Tweed will be having her own puppies! Momma meets all of their needs for the first month or so anyway so we will be able to focus on the new puppy to help her settle in.

So, our little pack sure is going to grow quickly next week! This is the pic that made us decide on the new pup. She is the one on the left. Do you think she looks like a Roxie?

It looks like the hunting lodge in Vermont is a no-go.  Upon close inspection we discovered that the property had some significant structural and systems defects and Fannie Mae wasn't motivated enough to sell it to meet us even halfway on repairs.  So we did some quick soul searching and agreed with each other that although the house and lodge would have been cool, neither of us wants to be burdened with a house that would suck time and money away from our traveling and hunting.  We are at the age where we know what we want and how we want to live and we are going to do our best to stay true to our goals.  So, it would have been great, but we have to say, "thanks, but no thanks" to that property.

We are experiencing a pretty good cold spell this week here at the cabin and the forecast is calling for somewhere between 3 - 12" of snow in the next 24 hours.  I think that 3 - 12 is a pretty wide range, nothing like covering all of your bases with that forecast, huh?  Tweed's belly is growing by the day and we are getting excited that puppies are less than 3 weeks away.  It will be a test of our resourcefulness to raise a litter here at the small cabin that is already busy with our 6 adult dogs but we are really looking forward to having the time to enjoy them every day.

This old Home Atlantic wood stove is the sole source of heat here at the cabin. It was manufactured not far away on the coast of Maine and as you can see is very popular with our dogs.  I hope all of you are staying this warm and happy this winter. 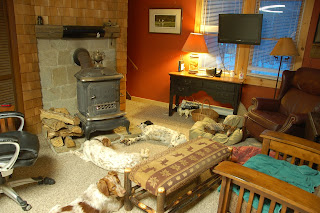 Posted by Firelight Reflections at 5:00 PM No comments:

Since Christmas we have been settled in, and snowed in, back at the cabin in Maine. We have stayed busy by exercising the dogs and even some good old fashioned sledding down the driveway.

But we have also been busy with our next project as well. We are in the process of buying a place on the Vermont/Canada border where we would live but also operate as lodging for hunters and snowmobilers. It is in an area known for good numbers of both ruffed grouse and moose yet there is little lodging available in the area during bird season. It is currently owned by Fannie Mae and in need of repairs, some of which must be done prior to closing, so we are doing the red tape shuffle with the government as our awkward partner. Hopefully we can successfully muddle through the process and get to work on it this winter.
The views are lovely, looking over the valley and into Canada.

We think we can make it very cozy.

Meanwhile Mike is already making plans and wishes for our 2013 bird season. If all goes well, we anticipate being at the lodge and grouse hunting in Vt until late November. Once the snow flies we will head to KS for bird hunting and some deer to fill the freezer back up. This state has also been showing up on Mike's computer a lot.....

...several species of game birds there are calling us, including chukar which would be a first for both of us. Stay tuned. The Open Range awaits

Posted using BlogPress from my iPad

Posted by Firelight Reflections at 6:08 PM No comments: