It took planning to travel with ten dogs to hunt for six weeks.  Everyone needed to be in condition and ready to go, including two eight month olds who required gun introduction before we left so that they could hunt with others in their apprenticeship.

The pups had seen wild quail so they had a good idea of what their job was, but they needed a proper intro to the gun.  A quick trip to a farm with a wide assortment of pens holding both common and curious species of birds provided me with a few pigeons to use for the gun intro.

Native prairie grass behind the house was perfect for flying the pigeons.  The first couple of releases were meant to assure acclimation, followed by gunning if each pup’s responses were on track.  The first bird was a dark grey and fluttered past the pup with appropriate noise and speed and all lights were clearly on for Kate who had drawn the first run.

The next bird I tossed was mostly white and after I tossed it into the air it chose to land on the ground instead of flying.

But Kate headed that way and slammed into a point and held. Atta girl. I had to roust the pigeon with my foot and off it flew, circling around and around my house, Kate in hot pursuit, eyes to the sky.

That darn bird and pup did three or four laps around the house before the pigeon finally landed on the travel trailer with the pup standing below, eyes locked on that white bird.  The rest of the preparatory training was less uneventful, all thankfully going to plan, and the great pigeon chase was forgotten. Or so I thought.

Arriving on the northern prairie with weeks of wild birds ahead was intoxicating, made more so by a crystal clear, cool night at the remote boondock camp.  As the dogs were aired for the last time that evening, I could hear them inhaling and sniffing the air, sorting out the many scents carried on the breeze. Except for Kate.

I noticed that she was standing perfectly still, head high and muzzle pointing to the sky. I followed the direction of her gaze and saw what held her spellbound: the quarter moon, rising in the clear sky. She was as mesmerized as she had been by that white pigeon flying around the house back home.  The sky was clear for several nights and each evening Kate would eagerly search for her white pigeon in the sky.

I don’t remember exactly how or why she lost interest in the moon. I suspect it was when she discovered the hot scent and chuckling flush of sharptail on our hunts. Looking back, though, Kate will always be my star who tried to catch the moon. 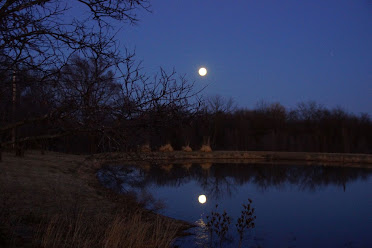 Posted by Firelight Reflections at 8:26 AM