I loaded the dogs and left Ohio early on a Sunday the week before Christmas.  An unabashed sentimentalist, I kept punching up stations playing holiday music all the way ‘til the only two channels the truck radio could fetch were mariachi music and a Top-40 megawatt blowtorch from somewhere in Canada.  I was almost to the motel reservation on the edge of a small town on the northern plains before I ran out of tunes.

My friends Gary, Nancy, and their Aspenglow setters, staying in an adjacent room, had left the door to mine unlocked and a key on the dresser.  They tumbled outside when they heard me backing up to the front of the motel, and we shared a cold, quiet reunion while I aired my dogs and tossed duffles and gun cases into my room.  We would meet for plat book reading over cereal and Nancy’s signature Scotch eggs in just a few hours.

The three of us hunted in flannel shirts and hunting vests the first couple of days, basking in unseasonably warm weather in this little pocket of pheasants and a few Sharp-tailed Grouse well off the “glamor spots” we all know from the where-to magazine stories and chamber of commerce press.  The bird numbers are surely fewer, but so are the hunters, competition for land access, and pay-to-play leases.  My friends have been hunting this county for decades, building relationships with land owners into an annual homecoming.

We had known about the weather change predicted for Day III before any of us had left home, blizzard conditions barreling down from the northwest.  On the eve of the storm, our long early evening ride back to the motel featured jittery pheasants lifting and settling up and down out of CRP grasslands and low sloughs, as nervous about getting buried in the coming snow as we were.

That night the wind howled, the snow blew, and our little motel shuddered and quaked.  I lay in bed worried about whether or not we could even travel the roads in my friends’ well-outfitted Suburban come the morning.  But the worst of the snow had finished before dawn, the wind died, and bright sunshine turned the landscape to blinding waves of drifted white sparkling in single digit temperatures.

Gary had mapped out our morning with the storm in mind, and we tramped shelterbelts and the edges of small sloughs.  Skittish pheasants lifted well out in front much of the morning, but enough of them cooperated with fast dogs that knew their business.  We broke for lunch, then cleaned birds inside the truck with the heater running.

The afternoon had been set aside for one of my friends’ favorite spots, a broad expanse of prairie centered by a solitary ancient tree.  As we drove north, the sky darkened and heavy snow, forecast for the evening, cheated in early, blowing across the fields.  Pheasants huddled in gnarly copses of Osage orange, the cockbirds glowing like Christmas ornaments on bare branches.  By the time we reached the pull-off to my friends’ “Lone Tree” area, a full-fledged storm was raging.

The spot below the truck was drifted.  Gary strapped on snowshoes, took a dog, and shuffled in that direction.  On the other side, the wind had swept clear a picked sunflower field and piled snow in a long stretch of switch grass.  All along the field margin, dozens of black bowling pin looking things milled and bobbed, pheasants spooked by the storm and activity around the Suburban.

Nancy put a beeper collar and a thin fluorescent orange vest on her mostly white dog Dawn.  “We must be out of our minds,” she laughed as we masked our faces and leaned into the wind.

The pheasants broke on our approach, cackling and clutter-calling as they flew in undulating streams across the picked crop field.  Dawn pointed three hen pheasants, but we couldn’t manage a rooster as we hunted the grassy edges to the field’s end, made a wide empty swing, then turned to hunt a long hollow that drained toward the truck.

The snow had piled up in places, the switch in yellow spikes just above the white.  When Dawn’s collar sounded “point” the wind stole its tolling on down the draw.  She was up to her flanks in snow and a patch of silver buffaloberry, visible only because of her orange vest, head and tail high, the snow around her broomed by the wind. 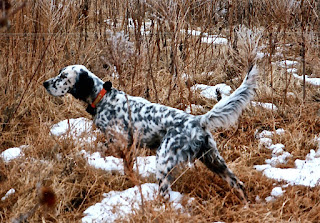 But Dawn had them, a pack of grouse burrowed in the snow.   The first bird flushed in a spray of white before tumbling to Nancy’s 20-gauge, the shot a hollow pop in the hard blow.  But that was all the rest of the pack would take. The snow all around Dawn erupted into chuckling, clucking sharptails, silver shapes launching as singles and pairs before three lay birds flushed almost under the dog’s nose.

Dawn snuffled and pounced through two more retrieves before Nancy sent her on downwind.  We all three were wearing down, with the truck a faint, dark smudge some distance away.  But the grouse we’d made at the head of the drainage had careened down the wind and reburied themselves in the snow.   Some flushed far ahead, but Dawn kept hunting, three times catching scent over her shoulder, whirling, and pinning a grouse between herself and her hunters.

We staggered to the truck and huddled on its lee side, panting and giggling like lunatics, our coats heavy with game and Dawn dancing in her goofy orange vest, begging for her warm crate tucked behind the front passenger seat. 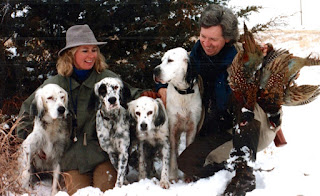 Nancy and Gary Johnson and their Aspenglow Setters

Posted by Firelight Reflections at 6:18 AM