In a heartbeat Lil Rip, our little bundle of fur, goes from “Amazing!  He listens so well!” to “OMG, he is flipping me off and ignoring me!”  Same puppy. Same owner. Same command and situation. What changed?

Lil Rip is growing up, more ready to explore the world where he wants to, when he wants to. And frankly, as the world becomes more interesting, you and your wishes become a bit less so. Remember, this is a dog bred to reach out and cover ground so that you do not have to, so expect it to happen. And face it: as they grow we actually want to encourage that certain independence and managed drive when afield . 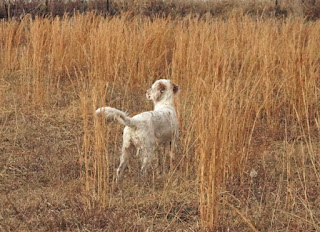 The key words are “certain” and “managed.” Coming when called is perhaps the single most important command for any dog. It is a safety issue: when a car is coming down the two-track you need your dog to come to you to ensure that they are safe. It is a sanity issue: when you are ready for bed and let Lil Rip out in the rain for a quick pit stop, you do not want to stand in the doorway in your jammies yelling until the neighbors’ lights come on.

So, when your five month old Firelight pup is out in the yard and surprises you by turning a deaf ear to your call, what do you do? First is being honest about background.  If you’ve established the kind of rapport with your young dog where Good Things Come To Those Who Come, then you’ve got a foundation upon which to build.  Second is a quick trip back to boot camp for a refresher course.

Get out that very long rope and just like you did when he was 8 weeks old; let Lil Rip trot around the yard dragging the cord. Practice “Come when called or I’ll give you a corrective tug if you don’t” a couple of times a day.  Hey, sometimes we all need to be reminded to follow rules. (At least that’s what they used to tell me in after-school detention.)

Then, let pup know that yeah, I may not be able to reach you with my hands but don’t think that means that you are out of my “reach.”   Prepare an empty water bottle or can with some pebbles in it and have it on the porch just waiting for this moment. Or maybe you can use that nice fresh snow to make a snowball. Or if you are lazy like me and wear slip on shoes, you can use one of them in a pinch (In winter, don’t throw your car keys in a fit of pique;  they disappear in the snow…or so I’ve heard).

Settle down, pacifists. I’m not talking about whacking your dog with the can/snowball/shoe. And, in fact, it is rather bold to assume that we can chuck an empty, noisy-rattling can 70 feet and hit our target. We are just sending them a message, a signal. The tossed item is to surprise them and break their focus on whatever was distracting them. We send the message, they look up, we immediately and sternly say “Come!”  (retaining the corollary “Comeheredammit!” for the very rare moment).

If we have done our boot camp refresher course well, they will come. If they don’t, then I hobble with my one bare foot across the lawn to Lil Rip with very clear body language that I am enforcing a rule.  With the relationship that we have built with this 5 month old tractable, biddable companion the message will be very clear that I mean business and am willing to back up any message that I send.

If done properly, one or two of these ‘reach out and touch them’ incidents is usually sufficient. Lil Rip learns that you mean what you say, that you have powers beyond your fingertips, and, most importantly, that you will follow through on enforcing commands. That is a huge message. 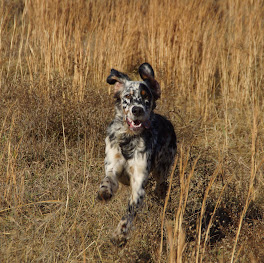 A common problem for families is a puppy that will mind some members of his human pack, but not others.  “Mom is the boss;  Dad (or the kids or Uncle Steven) works on the same pay grade as I.” The monks of New Skete Monastery live and work near Cambridge, New York.  Among their missions is the development of training programs meant to offer common sense companion dog training that helps owners forge a more complete connection with their animals. A drill they use is called the “Round Robin Recall,” described as an “experience in animation and praise.”

The exercise has family members (or interested, cooperative friends who can follow instructions) space themselves in a circle around Lil Rip who is dragging the aforementioned “reminder line.”  The monks use a 20 cord.

“The object of the exercise,” they write, “is to call the dog (using the decided upon command)…praise him (when he comes), and toss the rope to the next person in the circle.  This person then calls the dog and repeats the process.  The tossed rope is to ensure a prompt recall by the dog.  If he does not come after being called twice, give the lead a quick pop and call the dog, (gently reeling him in and) praising him warmly as he trots to you.”

The monks don’t spare the praise and don’t mind the use of treats in this exercise.  You shouldn’t either;  give the command, then clap, drop to a knee, or whistle and give praise, lots of praise as he comes. The monks recommend this drill twice a week, gradually broadening the circle gradually to the limits of the “reminder line.” (“The Round Robin Recall” from How To Be Your Dog’s Best Friend, 2002, Little, Brown, and Company, New York).

It doesn’t matter who you are:  sooner or later, your Firelight puppy is going to test you.  You’ve encouraged him, nurtured him, emboldened him into a happy, independent partner.  That’s the key word, though:  partner.  In fact, Lil Rip is the junior partner in your relationship;  he works for you, under your direction.  Surely one of the cornerstones of that partnership is a dog that comes when it's called – the first time, every time...eventually without your having to retrieve your shoe. 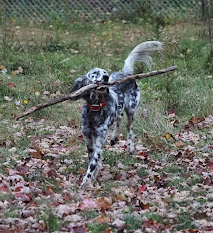 Posted by Firelight Reflections at 1:28 PM