The snow held off until after Christmas, a whirling, heaving curtain of white that buried southeastern Ohio and threatened to cut short our late season grouse hunting.   But just as we were stowing gear for the next year, a Chinook came through pushing a forty degree rise in temperature.  Fourteen inches of snow turned to deadly flooding that washed out bridges and closed roads.  When we finally could get into the backcountry, we were cut off from several promising spots we’d found just before the winter storm.
We were working stiffs back then, Lyle and I, hunting only weekends.  Six days later, we were back, and literally followed a county road crew picking up “road closed” barriers.  Not only were we back in business, we were among the first bird hunters to return to this vast section of overgrown strip mine auger benches and quarries, remains of the leviathan coal shovels that had cut the land into an Appalachian version of Monument Valley.
For thirty years after WWII, Big Coal surface mined Ohio’s Appalachian foothills into a wasteland, blighted country that John Prine wrote about in his classic ballad, “Paradise,” about an idyll lost:

Then the coal company came with the world’s largest shovel
And they tortured the timber and stripped all the land
Well they dug for their coal till the land was forsaken
Then they wrote it all down as the progress of man. 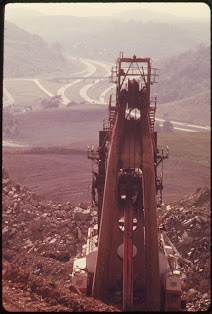 Those great shovels had names:  The Mountaineer.  The Big Muskie.  The Tiger, Silver Spade, and the colossal GEM of Egypt, land-devouring machines with heights measured in stories, that boasted their own internal elevators so their crews could ride to the operating deck to operate buckets big enough to hold two Greyhound buses.  At its height of operation, GEM of Egypt tore through the countryside to the tune of 200 tons of coal per bite of its huge bucket.

*And Daddy, won’t you take me back to Muhlenberg County

Down the Green River where Paradise lay

Mister. Peabody’s coal train has hauled it away.  *

The cost of cheap coal was a region left to erode into spoil banks, despoiled farmland, streams choking in silt, communities like John Prine’s Paradise, Kentucky, abandoned over polluted water and acid mine drainage.  It was only through the activism of the Sierra Club, the Audubon Society, the Farm Bureau and Grange, as well as the community of Ohio universities and allies in the steelworker and mining unions that pressure on the strip mine industry midwifed the birth of the Environmental Protection Agency and the beginning of strip mine reclamation in parts of Appalachia. 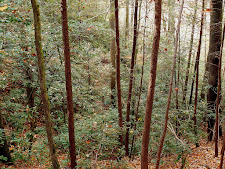 But while Big Coal fought a rear guard action against the cost of reclamation,  Ma Nature was already on the job.  Hollows and sidehill flats, abandoned farmsteads and orchards, came back to tulip poplar, thick tangles of blackberry and wild grape, rhododendron, greenbrier, and hawthorne. The result was the cradle of a grouse population boom that would flourish for some twenty five years.
One area we hunted in the mid-‘80’s centered around a sprawling coal-devouring power plant, its towering stacks belching waste from emptying more than one hundred train hoppers of coal every day.  A promising spot we had barely explored before the snow we called “Lovers’ Lane.”  The pull-off was a pad of cinders littered with empty beer cans, cigarette butts, and condom wrappers.  From there we organized the dogs and hiked single file a few hundred yards through a narrow opening between two sheer highwalls…and tumbled out into a hillbilly grouse hunter’s version of Paradise.
The highwalls were like a mammoth coliseum surrounding a huge, undulating expanse of gnarly, tangled cover.  The hunting was as easy as Appalachian grouse hunting gets, with overgrown benches broad enough for two hunters with dogs tough enough to scramble up and down on each side.  We’d barely touched it at the end of an afternoon a month earlier;  this day, we intended to have all of it.
And have it all, we did.  Lyle ran his flashy white and liver pointer Dixie;  I had Arran down, an eye-patched Aspenglow setter with a steady, ground-eating quartering gait that perfectly complemented the slightly wider pointer.  Dixie wore a beeper, Arran a pair of Swiss collar bells, and on this magic day they traded solid points and intense backs like jazz cats in berets and shades swapping licks in some uptown basement juke joint. 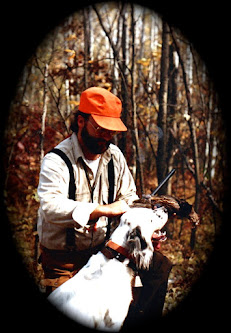 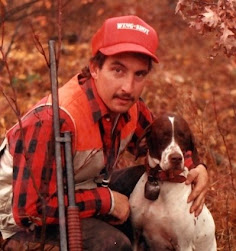 Never again in our Ohio grouse hunting would we have birds in those numbers in one covert.  It was as if every ruffed grouse in the region had yarded up in this bowl-like bottom.  The cover was dense, the birds held tight, and the shooting was fast and sporty.   For two hours, Lyle and I didn’t speak to the dogs or to each other, almost as if we were afraid to break the spell. 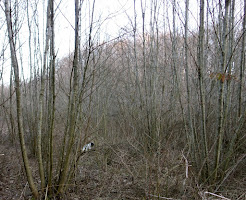 The part I remember best had us pushing toward the steady tolling of Dixie’s beeper.  Lyle found Arran first, her lanky frame low and arrowed into a tangle of grape vines. The pointer had pinned a grouse fifteen yards beyond Arran’s nose, and my friend waited for me to catch up before he swung wide to the left and I to the right of Dixie’s twisted frieze of a point.  We walked ahead farther than we could imagine the bird might lit before turning back in toward the dogs.  When the grouse clattered out from just in front of Dixie’s quivering pose, Lyle had no shot.
I did, a brown blur crossing left to right and rising, and I pushed the little 16 gauge hard in front.  The first trigger felt good, but the bird powered on.  My second shot I knew was well behind, even as I marked the grouse’s flight.
Both dogs had broken at the flush, so keyed were they with all the action we’d had.   Lyle asked if I’d hit the bird; I shrugged, fishing for two more purple shells from my vest.  We corralled Dixie and Arran back to where they’d stood the bird and kept them for a long minute before walking them at heel, downwind of the grouse’s flight.

A quiet word from Lyle, and Dixie burned off.  I made Arran hold, tapped her on the head, and watched her push into a long stretch of sawbriar, her bloody tail tip cracking through the thorny mess
We were micro-managers then, hedging our bets.  “Deeeeeeeead,” we chanted.  “Deeead in here.  Hunt deeeeeeeeeeeead.”
Noses up, the dogs’ casts went small and focused with deadly intent.  Dixie was slightly up ahead, checking out a black pile of sodden deadfall, when I saw Arran pause, then point more as a question than a statement.  I moved up alongside her just in time for her to relocate, then stop at the edge of a young thicket of black locusts, dark branches bristling with spines.
Again, the point was more pro forma stop than “boom-there-it-is”, and I was almost even with her again when the big dog reared on her hind legs like some circus bear…to stare and snuffle at the limp body of a ruffed grouse, dead where it had wedged itself into a tight, head-high fork of the little tree.
Arran dropped to all fours and begin to dance and jump at the tree.  I reached in with the leather glove I wear on my left hand and pulled the bird free.  It fluttered but once as I offered it to Arran to carry at heel, and we stepped off to find Lyle and Dixie, waiting where more paradise lay. 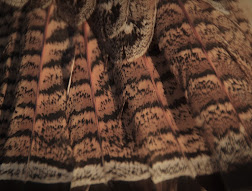 * "Paradise",  by John Prine, from the album German Afternoons on Old Boy Records. 1986

Posted by Firelight Reflections at 3:35 PM