Ahh, arguing on the internet about the finer points of gunning over a pointing dog has taken armchair quarterbacking to new heights.  Unfortunately, many times the kerfuffle is sparked by an unsuspecting person new to upland hunting who asks a question, having no idea that it is a trigger. One of those innocent and valid questions is, “What is the best range for a pointing dog when hunting ruffed grouse?”

You on social media who are whipping out your popcorn bowls in anticipation of sass will be disappointed here. That’s because the definitive, hard and fast answer is:  It depends.

Some of variables for which “It depends” is the right answer include the type of habitat you are hunting, are you hunting expansive woods or pockets of covers, is it early or late season, and the performance level/reliable staunchness of your dog.  However, you are perhaps the most important variable. 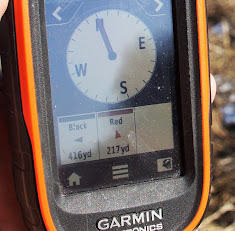 If you like to push through the woods quickly and cover as much ground as possible, hunting timberlands that are thousands of acres with only scattered islands of cover, then a more independent dog who consistently reaches for 200+ yards can be a good fit.  Instead of “watching” this dog work you will likely rely on a GPS.   Communication with the dog if you change directions will require blasts on a whistle or using a tone button on the collar.  When the point alarm goes off, you look at your handheld for distance and direction and quickly head toward the dog.

Important in this scenario is that you must have confidence that your dog will remain honest on point for those very long minutes it takes to climb over and through fallen treetops and brush to reach him. It is maddening to burn time and energy pushing hard through cover only to have your dog break point and flush the bird before the Gun gets there. 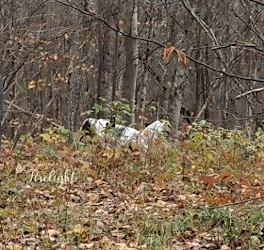 For hunters who want to feel that they have covered their more moderate sized coverts which have a good amount of habitat and want to be able to see the dog working at least some of the time, the dog who hangs between 50-125 yards is likely to be pleasing.  Early season in thick cover you will not see the dog as much as hear her movement, bell or beeper or catch glimpses but you will pretty much know where they are as they hunt.  If you turn around or change direction, communication with the dog can be simply a call or lip whistle.

After the leaves have come down and the ferns die down from frost, visual contact increases and you may even see the action as your dog gets birdy and maybe even as it freezes into a point. Obviously, the dog is still expected to staunchly point until the Gun arrives, but given the closer proximity the dog can obviously expect firepower support to arrive more quickly. 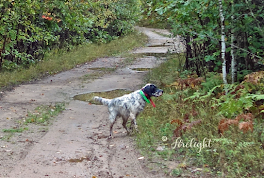 Many grouse hunting areas are rich with two tracks, trails and logging roads. Grouse like edges and these roads provide light which can mean good food sources along their edge.  There are many who enjoy walking these trails and watching their dog cast a little bit ahead or dipping into cover as the party moves ahead.  This dog may be only 25 yards into the cover as they move along. A simple bell or maybe a beeper set to point-only ensures continual communication between the hunter and the dog because they are usually within eye sight of each other.  This hunter usually sees the dog hit scent, begin to work a bird and come to a point. Gun at ready, this hunter is on the scene quickly.

So, which is the dog for you? The answer is, “Which hunter are you?” Being honest with yourself about your style, energy, habitat and preferences will help you at least with this aspect of choosing your bird dog.  And although you love that week of hunting the wide open western prairie, be honest about where and how you spend the bulk of your time. If you hunt thick cover 40 days a year and the prairie only 5 days, it is a case of “horses for courses”: go with the dog that you will most enjoy those 40 days.

Now, as to which of the above dogs will likely produce more shooting opportunities for you?  Sorry, I’m not going to touch that one with a ten foot pole but there are plenty of armchair online quarterbacks who would likely be very happy to give their opinion.

Posted by Firelight Reflections at 11:27 AM