Gentle On My Mind

The first time I ever heard the word “predacious” was shortly after an over-indulged, sullen shorthaireddrathviszpointer went up the arm of a famous bird dog clinician as if said arm was an ear of roasted corn.  We were on the admittedly grim “force fetch” part of the seminar, and this swaggering dog had had bloody well enough of the process.

Once order had been restored, the clinician, nonplussed but still dripping blood, gave a short spiel on the “predacious nature of certain Continental breeds,” as well as some of the more “intensely bred long-tailed dogs used in competition”.   He did so admiringly, saying it was vital to drive.

“Folks,” he said, “you want a predacious dog.  You need a certain level of aggression, though not expressed this way,’ gesturing with the leash toward the chastened client dog.  “You gotta have one out there pushin’ cover, lookin’ for somethin’ to kill.”

To which we at Firelight might say, tongue in cheek, “Predacious to a point,” yes.  To a fault, no.

What passes for “predacious” in the current common parlance is too often code for “high strung,” perhaps to the point of borderline neurotic: a dog that’s always on edge, challenged in terms of chilling in the house, in transport.  Such dogs remind me of falconers’ birds we’ve known: on overdrive in the field, connected by a thread, always on the rim of being lost.

Certainly some folks not only choose to live with that profile, but seek it out. “You can always rein one back in,” they insist, “but you can’t instill that Juice.”

For those of us after a proficient, even exciting, companion gun dog, that doesn’t need to be a binary choice.  One absolutely must have  “juice” in casting for game, for intensity on point.  However, that never should be a cover euphemism for a dog aggressive with humans or other dogs.  Neither should that make for merely a suggestion of a field partnership. When “predacious” translates into extreme range or free agency, we readily admit that most of us want to hunt with, rather than for, our dogs.

Important too is the notion that between hunts, we want to be able to unplug our canine partners so we can live happily at hearth and home.   A high energy, “predacious” dog can hardly be exercised enough; we spend a great deal of time protecting that dog (the kids, kennelmates, the house cat, the father-in-law) from its own innate edginess.  That’s not the point of having a companion dog. To borrow from the rapper philosopher Jay-Z, “I got 99 problems, but my bird dog can’t be one.” 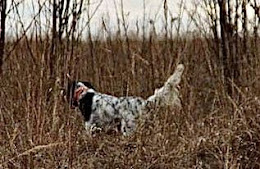 Recently, an experienced bird dog owner described the temperament of his nice setter as “gentle.”  I bristled at that a bit.  I’d seen the dog hunt on video, had hunted in person with its dam and a littermate.  All were tough, cover bashing gunslingers, savvy, independent operators that accepted their hunters’ spare and judicious handling.  But “gentle”?


The dictionary set me straight.  “Gentle” is, by definition, “moderate in action,” “absence of bad temper,” “easily managed or handled.”  Check, check, and check.

Most of us want a dog that works on a string in the field, plays on an even keel between hunts.  We want dogs that accept boundaries and confinement, defer to higher ranked pack members, and require but light, timely correction.  The best of such dogs are ambitious and athletic enough to manage the kind of conditioning a performance dog needs, are intense in the presence of game, but are not on the prod 24/7, 365. 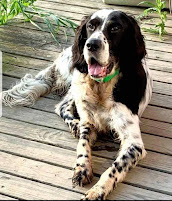 So how do we find such an animal?  We look for a meticulous breeder who’s been producing this kind of dog not occasionally, but for generations.  We choose a breeder who lives and hunts with his or her dogs the way that we do, who can provide references: others who own these dogs and who also live and hunt with them the way we intend.   We ask permission to visit and observe the dogs in the house or in the kennel, best of all, in the field on wild game, even if just on video.

Obviously if, during our visit, we observe manic barking, caged-animal pacing, or over-assertive bully behavior, we thank the breeder and move on.  Likewise, we’re going to shy away from what an acquaintance delightfully calls “the slobberknocker”:  a sweet, scenic, slow-plodding himbo, a dim bulb athletically suited only for couch décor or doubling as a fireplace andiron.

That’s not the “gentle” we’re seeking in a predator gun dog.  Instead, we are looking for “gentle” as in a “quiet mind.”   A quiet-minded dog is alert, charismatic, and connected without being batty.  That’s the dog that can get out of its own way enough to learn and build on that learning.  In a true sense, we’re after a “variable speed” partner, upbeat but not relentlessly, mindlessly up-tempo.

Call this animal “The Gentle Predator,” the family gun dog eager and happy on the job, anxious to please, alive and receptive to cues, docile in accepting confinement and boundaries.  Surely all of this can be enhanced by a thoughtful trainer’s brand of “Nurture,” especially in terms of a young dog’s learning to learn, learning to respect space and boundaries, learning to defer to higher ranking pack members…but… all of that’s a heck of a lot easier to shape when starting from “Nature.” 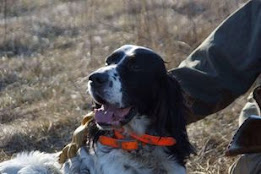 Posted by Firelight Reflections at 7:45 PM