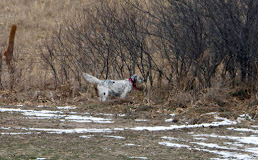 by Lynn Dee Galey
“Sally’s down!” In quail country that is not an ominous warning of dog trouble but instead
is a bobwhite quail hunter’s way of calling “Point!”

Quail quickly earned their way into my heart when I moved to Kansas, beautiful little birds whose “Bobwhite!” call is a favorite, right along with the meadowlark’s. Pointing dog work on quail is straight out of story books with varied brush, thickets and fencerows for cover yet the dogs are often visible for viewing pleasure.

Quail have a defined home territory and don’t wander far unless repeatedly pressured. Conservation minded hunters visit a covey only once or twice a season and are careful to take only 1 or 2, or maybe 0, birds from the covey depending on how many are in the group that year.  Researchers have found that covey survival requires at least 8 birds so for me, any covey with fewer than 10 birds means those unfired shells go back into my pocket but with a thanks for the fun for the dogs.

Living and hunting in the local region you come to know the coveys. My New England habit of naming coverts followed me to the plains: Black Squirrel Cover or the Oak Hill Cover or the Road Crossing Covey.

And the Vaporizing Covey. 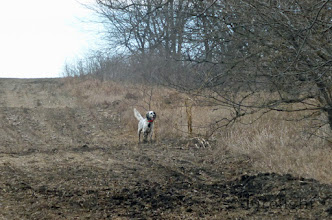 Scattered across the countryside there were numerous coveys whose home turf was a peninsula in a sea of agricultural fields. A rusty barb wire fence would be partially draped between large hedge trees, marking the time when fields were smaller. Brush, berries and locust trees would grow up between the hedge with a rim of prairie grass around the outside edge. A really good hedgerow cover could be up to a mile long and 200 feet wide.

The Vaporizing Covey might be only 20 yards from the truck. Or they might not be found until over a half mile later when the cover petered out to a wisp of a plum thicket. They usually held well for the point, as if they knew that it didn’t matter because they were about to pull their disappearing act regardless. Move in for the flush, and enjoy the exciting sound of those little wings as the birds would scatter. 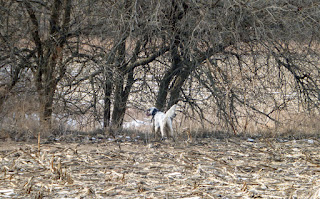 If lucky I might drop one on the rise, but more often they would pull the usual quail maneuver of flushing through the timber to the other side so that a lone gunner had little opportunity. Carefully watching to see which way they flew, the dogs and I would head that way.

With most hedgerow coveys like this I could locate and get some nice singles work before turning the dogs back toward the truck. But with the Vaporizing Covey…. it was rare to ever find even a single bird: bare ag fields on either side as far as the eye could see and only this strip of cover yet, the birds would disappear. Over the years it became a challenge to find them. I had to assume that they had flown out into the fields and were hunkered down, camouflaged on the bare earth of winter, but sending the dogs on wide sweeps onto the moonscape never produced. Perhaps they doubled all the way back and crossed the road into the over-grazed pasture that was off-limits.

These little native birds have been outsmarting better predators than I for a long time. And although it’s humbling to be bested by a 6 ounce bird it’s good to know that they will likely be there for a very long time. Good luck little guys and thanks for all of the fun.

Authors note: If you are interested in bobwhite quail hunting, here is an essay that I suggest :

Posted by Firelight Reflections at 11:54 AM