Lynn Dee?  Lynn Dee?!!  I heard my hunting partner calling my name and realized that from 100 yards away he had not seen me go down when I stepped into the badger hole.  I had gone down in slow motion, gently tossing my empty gun into the grass nearby.  The tall, lush grass was warm and soft and had I not heard my name being called I might have lay back and relaxed.  But I waved my hand in the air and said “over here.”  “What are you doing?”  (Really??  What am I doing?!?)

The walk out from the truck had not been very productive.  A small group of sharptail had lifted several hundred yards ahead of us and flown over the hill into the horizon.  The dogs had hit the grassy draw and field well but without result.  As I rose and picked up my gun my partner said he was going to swing left toward a deep coulee that he could follow east back toward the truck.  I decided that I would go right and follow a brush filled draw that also led east.  As he and his two dogs dropped out of sight I called to my mother and son brace and headed out. 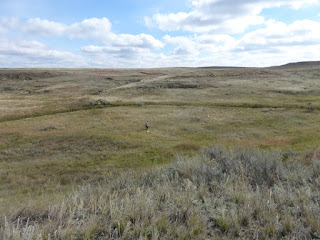 Sally was a savvy and experienced dog but Flint was just 10 months old.  The season had been open for only a few days and his bird contacts so far had been second hand. Showing that he was a natural at backing, he had watched as the adult dogs had handled sharptail and huns and had been part of the pack’s celebratory retrieves. But he had discovered that when you are running with 3 or 4 experienced adult dogs, claiming your own first finds isn’t easy.

As I walked I caught glimpses of the brace ahead of me, smoothly weaving through and around the Russian olives that clustered in the drainage right up to the edge of the freshly mowed hay field.  When Sally didn’t show for several minutes, I dropped down into the draw and found her standing on point.  Flint swung in behind me and backed.  As I walked in several birds flushed and I managed to knock one bird down and Sally brought it in with her usual merry style. 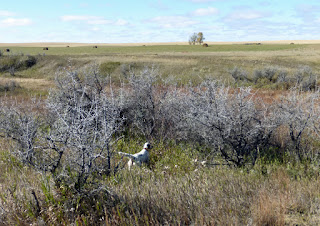 From what I had seen, most of the birds flushed had gone long across the field. But at least one had flown east down the draw where we were headed.  The truck was less than ¼ mile away when I saw a motionless white patch through the brush ahead. As I came into view the breeders-heart in me skipped a beat and a small YES! whispered across my lips. There was Flint on point. Out in a clearing for all the world to see and admire. 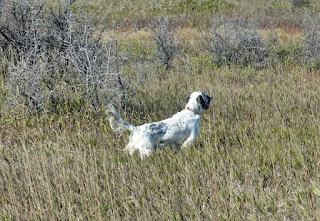 My late, wonderful friend John Jensen once told me about the time that he won a skeet championship when he hit 3000 targets in a row but his opponent hit 2999.  John, I'm thinking that the pressure you felt on that last clay was about the same as I felt walking past Flint on that point.  His first bird on his own and so splendidly handled. Another Yes! was whispered when feathers puffed and the bird dropped.

Flint has gone on to be a splendid and stylish hunting companion across many species.  But how special is the memory of that oh-so-sweet first bird. 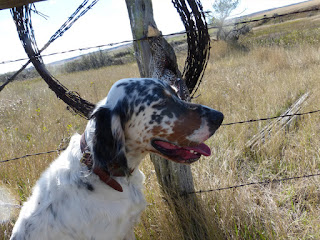 Posted by Firelight Reflections at 5:26 PM