Echoes On The Prairie 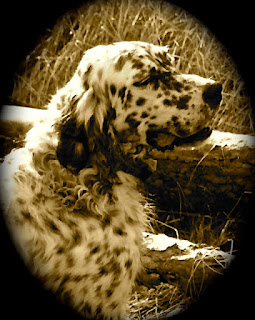 The air felt 10 degrees cooler down in the ravine.  We had been walking for a very long time over the hard-baked September prairie without moving a single bird.  The plum thicket at the bottom of the coulee held a trickle of a creek, and  Dusk, the big old-timey looking setter, drank his fill before we pushed on to the head of the draw.   A dense cluster of shrubby plums squatted there, dark and thorny, marking the spot where we’d eventually climb back out on top to the grasslands. 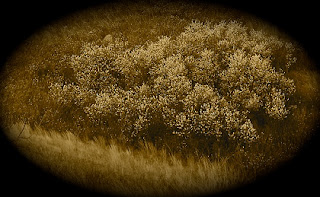 I believe there are times when we simply feel we are in the presence of game.   A cynic might suggest that any prairie bird hunter who didn’t bet on the end of that cut should turn in his boots.  Either way I was already hustling up the slope when Dusk went solid just inside the plum patch.

He relocated one time, then pointed again.   I could hear bird mutterings and scoldings deep in the shade before a Sharp-tailed Grouse beat out of the cover into the turquoise sky.

Perhaps it was the heat or fatigue or maybe just a smug bit of calm from being right about the cover.  Whatever the reason, for once, I didn’t behave as if wingbeats set my hair ablaze.  I got myself turned, the antique 16 gauge came up without a thought, and the second grouse lifting through the gnarled branches folded as it cleared the trees.  Two deep flushes off the edge of the draw came before I could move on a Sharp-tail I didn't even hear go out, a  hard-flying silver shape banking right to left over the thicket.  That bird tumbled off my left barrel, a silhouette against the late afternoon sun.  I broke the gun, short-stopped the ejected empties with my right palm, and looked for the dog. 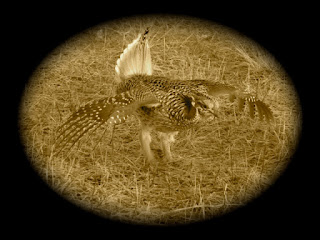 Too late.  Intent on the retrieve, Dusk had stumbled on a pair of skulkers.  He stopped at flush, wagging his tail almost sheepishly as the lay birds clattered away, dark shapes twisting into that odd waggle-flight of prairie grouse.

Eventide caught us cleaning birds and feeding dogs next to a backcountry stock tank tucked into a broad valley.  Game trails spidered away from the big cement pool brimming cool water from a prairie spring.  We had just finished our chores when the bison came out of the gloaming to drink.

Part of a small herd we’d been told ran this particular ranch, they tossed immense shaggy heads, grunting and shuffling single file down the far rise.  We clambered into the truck and drove up the opposite hillside to a low ridge overlooking the tank.  Sitting down against the truck, weary legs stretched in the grass, we watched the snuffling, jostling relics gathered ‘round the water under a sliver moon, like the grouse, the dog, and the slender double gun, echoes of times long past on the northern plains. 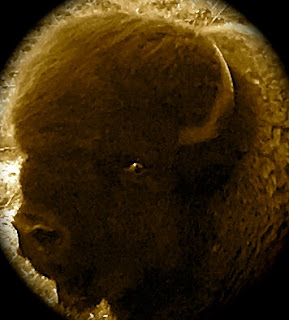 "Bison Bull" and "Aspenglow Dawn t' Dusk" by the author.

Posted by Firelight Reflections at 3:45 PM