In January of 2018, I attended the RymanSetters.com Breeder Gathering in Kansas.  Gathering days are filled with daily hunts followed with evenings of lively group dinners, evening discussion forums, and a lot of fun.  Members attend from all over the United States for the wild bird hunting and fellowship of course, but a critical side component is the chance for the kind of networking that small-scale breeders crave most:  the chance to scout, in person, dogs who might make into future breeding partners.
One day in particular, I hunted with New Yorker Bob Mele and Walt Lesser, lifetime Ryman setter aficionado and co-author of The Real Ryman Setter.  One the ground were my Sally and Bob's two females, Lizzie and Abby.  The three dogs were nearly indistinguishable as they skirted the edges of the cover, hot footin' to hit likely spots on the horizon, weaving in and out of every pocket in that particular section of farm country.  Although that particular covert was not especially productive for bobwhites, I was impressed by the hunt Bob's dogs showed and discovered they were related, Aunt Lizzie to Niece Abby.  That started this breeder's scheming, dreaming wheels a'turning. 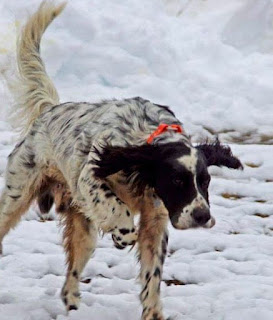 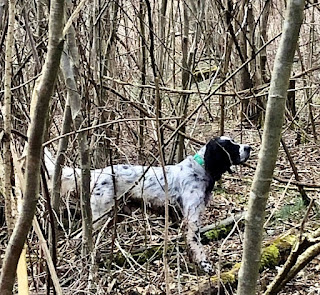 Doc
Two days later I hunted with a Ryman/Llewellin male from Idaho called Doc, Abby's sire and Lizzie's brother.  As I watched him hunt hard, stylishly point his birds, then lie down and relax on the sunny hillside next to his owner, I was pretty sure I had found the sire of my next litter.   My Dreamboat Annie would be the product of our breeding to Doc, and now, three years on, that little spitfire gal is a lady in waiting on a litter of her own. 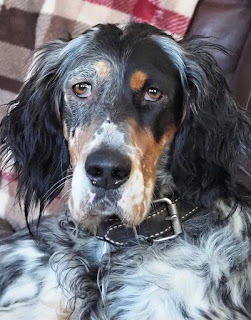 Dreamboat Annie
Selecting proven bloodstock is a full time job for the breeder who puts hunting ability and performance conformation at the tip top of considerations.   That means studying video.  That means long conversations with others who have hunted with a certain dog and actually knows at what he or she is looking.  The ideal is the rare chance to actually walk behind that dog in the wild bird coverts.
The stakes couldn't be higher for folks who breed but one, at the outside two, litters a year.  Get it right, and the breeding totem moves forward toward the ideal.  Get it wrong?  That's a detour that may take years to get back on course.
Some of the most important litters in ongoing my breeding blueprint have been literally years in the planning.  Firelight Tweed was an exceptional companion gun dog and remains an important touchstone in my breeding program.  When I had the chance to meet her son Parker and his owners at the aptly named landmark pizza pub, Parker Pie in Vermont (an absolute must stop each visit I make back east), I was taken aback at how Parker was his mother in male form.  He had the look, the personality, the character, the quality, the field reputation.... unmistakably a Tweed offspring.  Plus, he is the brother to my outstanding bird dog, Storm. I knew that day that I had to get a puppy from Parker . 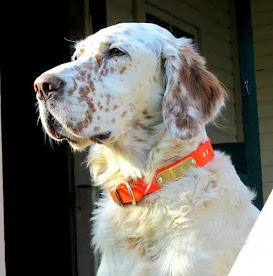 Parker
.
Years later I sent a photo of a 3 week old puppy to Parker's owner and said, half-jokingly, that I finally had the right female to breed to Parker so the boy had better keep himself prime!  That puppy was my Kate, and she lived up to my intuition in every way.  When she came of age as both a fine field performer and potential brood female, plans were made, but a family emergency suddenly made Ken and Parker unavailable when Kate was in season.  Plan B was ready in just such an eventuality;  I bred Kate to another lovely male and those pups have been precocious and oh so pleasing.
But I still wanted my Parker x Kate litter.
Arrangements were made, but on the cusp of a Parker-Kate hookup, Life happened...and Kate came into heat in the middle of the sale of my home in Kansas and a search for a home in the Michigan grouse woods.  That meant that the movers and my household headed to a storage unit in Michigan while Kate, the rest of the pack and I headed to Cape Cod and Parker.
Our timing was perfect. We got two breedings.  I filled up on fresh seafood. All that was left was to head back west for northern Michigan where I still needed to shop for and buy a house in time to deliver the pups that I knew were coming.
Despite every monkey wrench Life threw into my Swiss Watch/Cuckoo Clock planning over the next two months, we managed to manage:  I moved into my new Michigan grouse house on a Saturday, built a whelping box the next Monday, and welcomed ten Kate and Parker puppies that weekend.   Two years later, that litter is turning out into everything I thought that they would be, proof of the best of what judicious line breeding can offer in fixed, desirable traits.  I watch Dance, my puppy from that litter and in my mind's eye I try to see what she might be able to weave into the weft of Firelight genes. 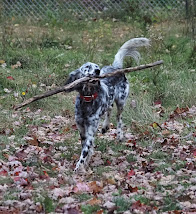 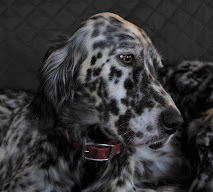 Dance
Parker, it took me nine years to get to you, buddy, but it sure seems you were worth the wait!

Posted by Randy Lawrence at 7:39 PM