Breeding The Off Switch 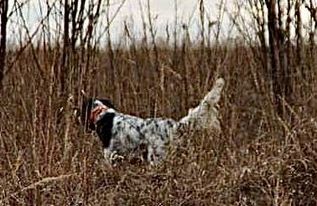 It was the kind of text I love to get, a report on a puppy with a bit of October Blue Doc in the pedigree:

"Friendly, affectionate, loves to run in the woods, thought pigeons were terribly exciting but so calm.  Just walked around, and when we sat at the patio table he laid down near us and chilled.  Owner keeps telling me that he has never had a puppy so...composed."

A photo was sent, showing the puppy lounging in his open crate - his crate - watching his folks go about their business. 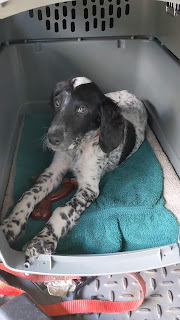 Only time and chances on wild birds will determine what kind of gun dog this little guy will be, but the gratifying thing to me is that he is already keen to cast and hunt, already fired up about birds, but came equipped with an "Off Switch," that makes him an easy keeper, the kind of dog that his people want to be around in their home life.

Granted, his people are doing a good job.  The pup has a clear sense of Place, not just his crate, but his Place in the family.  They've helped him learn to learn, they've rewarded his sensible behaviors, in fact, catered to them.  In short, they've built on what his Mama and Daddy gave him. 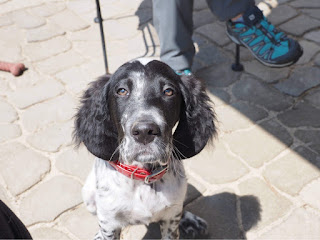 Pointer breeder Robert Wehle marketed his dogs as "genetically trained."  Some of that was, to be honest, marketing.  But what he meant was that he strived to produce puppies with sense and sensibility, in short, the Off Switch we're talking about here.  His expression was, "They know when school is in session."  They know when it's not, as well.

That's not a small thing.  Too many of us settle for bird dog prospects that have but one button:  "On."  Or maybe two:  "On" and "On-er."  They get it honestly, from parents that have so much "game" to them that they can't face it.  They are up and down.  They pace.  They are constantly into things.  They have no sense of place.

In short, they are a nuisance.  Those are the youngsters that are too often consigned to a kennel where all of that energy just burbles, bubbles, and boils over.  What passes for conscious thought is "Anywhere but here," something that carries over into the field.

My writer friend John Rogers once said, watching such a dog bouncing off the chain link,  then disappearing over a far field edge, "Aye, but thou hast been too long in kennel pent."

When it's school time, such animals have focus issues, energy issues.  They are distracted by anything and everything.  One such dog we had to work in a big enclosed pole barn, just to get any obedience work done, because every tweety bird that went overhead sent him into paroxysms of nonsense.  He made a grouse dog, of sorts, but never really managed to get "all of his stuff in the same shoe."

"Give me drive in my bird dog," people say.  "You can always take some of that out, but you can't put it in."  Puh-leze.  What good is all of that "drive" when I have to hunt a youngster half a day before she settles into the business of hunting with me rather than pinballing about the woods like a jackal on acid.  If I have a well bred youngster from the best, proven wild bird stock, collected enough to get around in front of me in good country, game contacts will instill all the drive we can use, and more.

October Blue Doc went hard.  He ranged to cover and conditions.  He pushed coverts with a predator's verve and intensity, but in his time with me, he never forgot we were out there working together to put birds up for the gun. 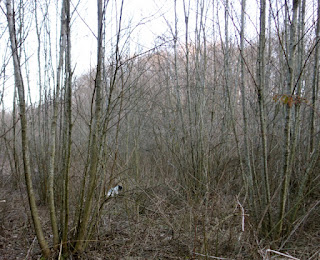 But Doc had that Off-Switch.  At home, he was a companion farm dog, the one who rode shotgun into the village post office and cadged treats from the nice ladies in the bank drive-through.  He slept through guitar rehearsals and lounged on the porch while I visited with my Amish friends.  He loved affection but never made an issue of it.  He wanted to be where he could see me, but he didn't need to be on top of me to be reassured that he was The Man. 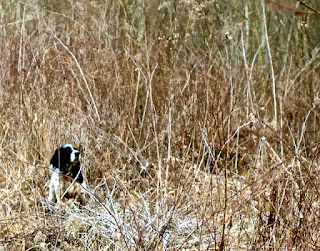 I fear that I write too much about Doc in these blog posts...but I won't apologize.  I feel as if it's OK to brag on him because he wasn't mine.  Cliff and Lisa Weisse bred him, and he was Lisa's hunting dog.  When he came into his retirement with me, Doc had known for a very long time exactly who he was.  From our time together, he knew what he was to me, too.  The puppies blending his blood into those established performance Firelight genes carry themselves in much the same way...and I never get tired of hearing about it. 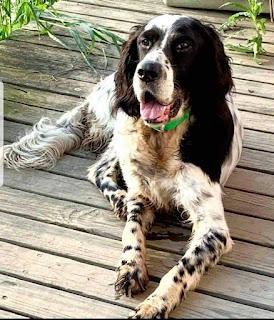 The Off Switch: October Blue Doc entertaining guests at home.

Posted by Randy Lawrence at 8:45 PM