This really isn't my story to tell.  I just can't help myself.

Firelight Moondance is a friend of mine.  Lynn Dee Galey had marked her as "special" from the whelping box on, so I was thrilled when 'Dance spent some time down here in southern Ohio a year ago, helping me through a hard time during my father's decline, entertaining me with her quirky antics in exchange for some kindergarten bird work experiences we had together.

"Quirky" plays well on this old farm.  In fact, it's almost an entry requirement, starting with the guy whom the horses and donkeys and mules and pigeons and cattle and dogs think works for them.  'Dance fit right in.

So don't expect me to be unbiased about anything about her, from her pedigree to her name to the somewhat unorthodox way she's gone about coming into her own.

But today Lynn Dee Galey sent me a photo of her youngest in-house Firelight.  Seems they were walking one of the sandy two tracks near their home in Michigan when this happened: 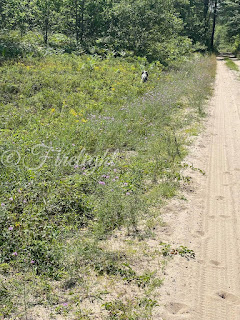 Lynn Dee writes, " Walking up the road, and 'Dance went on point.  Allowed me to walk up, calm and composed, and the grouse flushed.  I didn't want to harass the birds, and I suspect there were chicks somewhere around, so I praised her and picked her up.  But good job, 'Dance; good job." 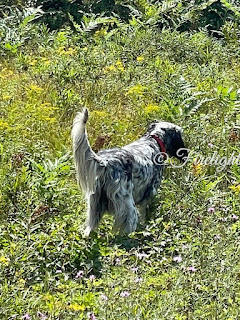 Lynn Dee Galey's trademark Vermont Yankee reserve aside, this is pretty small beer in the grand scheme of bird dogs.  My old friend Nelson Groves, the godfather of Southern Ohio grouse hunters, would have snorted and said, "Well o' course she stood there." (To Nelson, dogs didn't point; they "stood there.")  "That's what her ol' mother did, and her daddy did, so that's why I hired her."

But 'Dance is one of those "dif'er'nt" youngsters, with tons of precocity in one instant, and then goofy, almost willfull, adolescence swamping her the next.  Time and the kind of bird exposure that Lynn Dee will provide her, from the High Plains to the Lake States, will tell the tale, but you'd be a fool not to bet that Lynn Dee knew what she was doing when she kept 'Dance from a particularly promising Firelight litter.
Heck.  'Dance has known it all along.  Just ask her (she WILL talk to you). 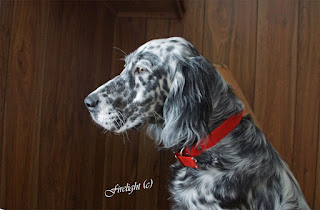 Me?  I was late to the party.  But she had me at the first time she leapt to do a Suni Lee-worthy backflip and stuck the four-footed landing, all in the name of her conviction that she could indeed get enough air to catch a homing pigeon steaming high overhead en route to the loft.
"That's some weird (stuff)," said I to myself.
Naw.  'Dance is but a tad quirky...which makes her just my kind. 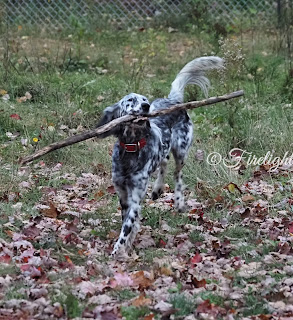 Posted by Randy Lawrence at 4:03 PM