The Off Switch (Too) 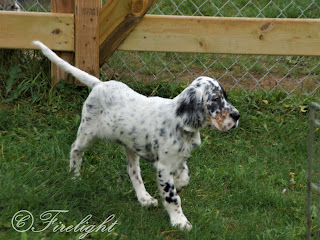 Ever since Lynn Dee hit "publish" on the last blog post, "Breeding The Off Switch," I've been fretting.  I felt as if I wasn't able to express just how rare and difficult it is to produce setter puppies that hunt like speckled demons, but can be civil, in fact, chill at home.  I think I made it clear such qualities were desirable;  I'm not sure I acknowledged just how rare all of that is in the kind of dog I want to hunt.

For my sport, I want a fast, bold dog with fire and verve and courage, one with the conviction to range likely cover as widely as necessary for us to find a bird to kill, one he's pinned, cornered, overawed into sitting tight until I can stagger up alongside and put it to wing. 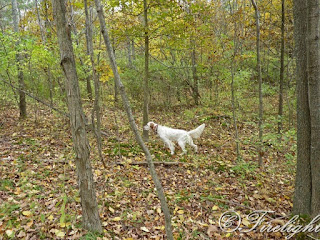 When my dog's on point, I want to see the same fever in him that I feel right then in me, like he could almost burst into flames so hot is the bird taint on him.  I want him to look so good, so BillBleepingHarndenFoster molten gorgeous that there's always a dilemma of camera shutter vs. trigger. 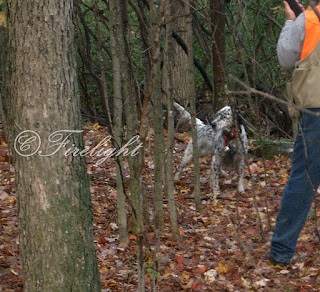 And if it's the trigger and we get lucky, I want him to streak to the fall, maybe even pounce on it, and bring that bird back high and handsome with the same expression to him that I know I'm wearing. 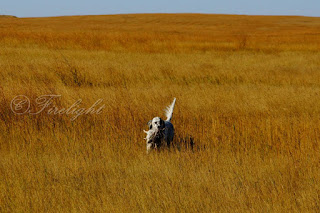 I've written it before:  We ain't so cool when we get it right.  Not do we make apologies when we party.  He wriggles and wags and acts the fool.  Heck, I've been known to bust a move, too, even now when "bustin' a move" risks an arrhythmic, geriatric white guy bustin' somethin' that might fall apart any minute now anyway. 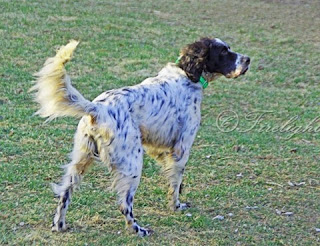 When we move on, it's together.  I trust my dog.  I trust whom I've become to him in all the hours we've spent together since he came home to the farm.  So he goes like thunder, but with the kind of handle that no eCollar or Iron Check Cord Nazi can put on him, the one that has him checking in without coming all the way in en route to another likely stretch of cover.  He swings by because he wants to know where I am because he trusts me, too... 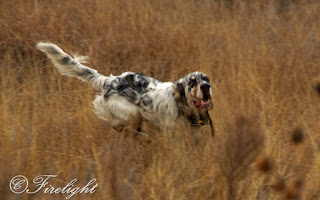 ...and that's the handle we were able to forge because he came with that Off Switch.  I wanted him with me because he was easy and smart and beautiful.  I could take him fishing.  He eats dinner with me.  He checks the cows with me and only occasionally gives the barn cats a rip.   He goes into the dog-friendly feed store and cannot stand it until the clerks made a fuss over him.  He's quiet in his crate, he's quiet in the kennel, but best of all, he's quiet at the foot of my bed at night where he and the rest of my misbegotten menagerie keep the Dark Night away so we can all sleep.

Lots of folks can breed a pretty dog.  A number of people can breed a kind, mellow, lovable pet that makes into a bird dog of sorts.  But when Cliff and Lisa Weisse did their homework, looked over dozens of outside studs, then had the courage to outcross to (Heaven Forfend!) a Llewellin named Houdini's Man O' War, they just happened to birth a true paladin in October Blue Doc. 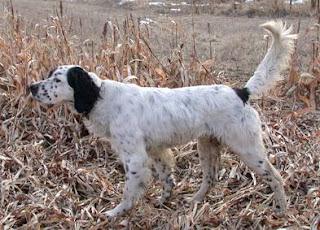 Lynn Dee Galey putting Doc to her superb Firelight females has seemed to enhance those qualities, something I know she does not take for granted.  And me?  I see the Doc/Firelight sons, daughters, and grandpups starting to find their way and...well...I can't help it.  I've still got a move or two left to bust. 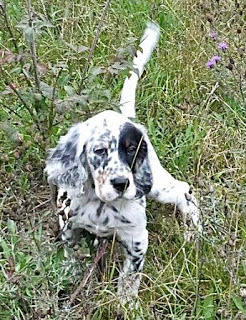 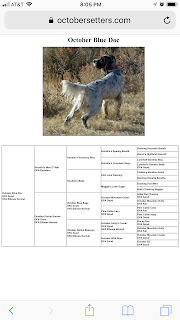