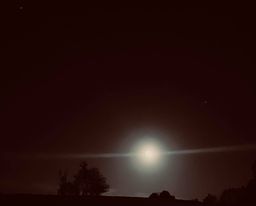 He belonged, always, to Lisa Weisse.  He knew it.  I knew it.  But when October Blue Doc left Idaho for retirement in southern Ohio, he and I made the best of it.  I showed him what would be his bed on the floor near mine.  Doc showed me game birds.  We became thick as thieves, and even though he was not my dog,  he never let on. 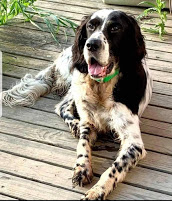 So tonight, when I got the text "We're moving into the Puppy Room," I went up on the hill to sit near him.  I got there just in time to watch what media folks were calling "the Super Pink Moon" grow right out of the eastern horizon.

The Shawnee who hunted this hills before satellite dishes beamed in names to the natural world called the one that heralded our month of May "the Strawberry Moon." We'll go with that handle instead.

The writer in me wanted to hear a woodcock peenting as the sky began to glow;  instead, Doc and I got an angry wild turkey gobbling somewhere up Donkey Hollow, probably scolding an owl silly enough to try to claim this night as his own.

"We're moving into the Puppy Room," Lynn Dee wrote.  In a year dominated by other "p" words - Pandemic, Protests,  Parasite,  Prison for "Aunt Becky" (Lori Loughlin),  Ariana Grande's "Positions" -  I suppose "puppy" doesn't hold the candle that maybe Doc and I think it should.

But this is our hilltop, our night.  We'll decide between moonshine and shinola. 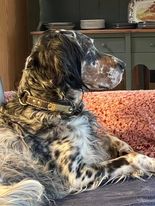 Dreamboat Annie, riding a little low in the water at birthin' time.

After all, that's Doc and Mustang Sally's own daughter, all moody and miserable 6 and 1/2 hours north of us.  Reports are that she's refusing food, tottering out into the yard to relieve pressure - some pressure, any pressure - trying to get comfortable on the couch, on the floor...and now in the Puppy Room.

P-words.   "Precipitation" is another.  It snowed today in Mio, and that's fitting, as a whiteout played a role in this litter from the start, threatening to derail the mating with Tip, from foolhardy travel to endless maddening foreplay in the upstate New York drifts. 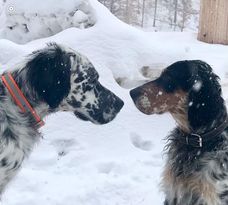 In fairness, Annie's no Lady.  But then Tip's far from anyone's idea of a Tramp.
Oh, and we can't forget "Pool," as in the one Lynn Dee Galey sponsored amongst the Firelight Faithful, trying to predict when Dreamboat Annie's cork would pop.  My date, May 1, is not looking so good under this big puppy pulling moon.

In the end, the "P" words holding Doc and me together tonight are "progeny" and "posterity."   Those are Doc's grandpuppies itching to get born.  Progeny,  Posterity, and Proof - proof that even though he cannot leave this hillside, Doc is not done, that his blood runs thick with class and companionship, grit and smarts and a predator's keen edge. 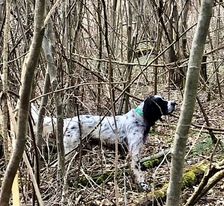 October Blue Doc in the alders.

He will hunt on through this batch of what, in a matter of hours, will start out as white mewling hamsters and then suddenly turn into little dogletts, surely some of them sporting a telltale "Doc Spot,"  all of them - every jack 'n' jill of 'em - a piece of Doc...which means a piece of maybe the best of me, too.

C'mon, Dreamboat Annie.  Ship full of dreams.  May this Strawberry Moon light you safely into port. 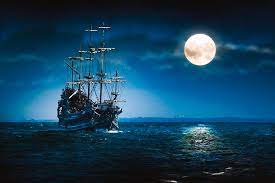 Posted by Randy Lawrence at 1:28 AM