As Annie was just now standing close, leaning on me to get some loving, I realize how important the role of breeding plays in my relationship with each of my dogs. From handling the mating through the care and extra attention of pregnancy, to the vulnerability, support and 24 hour care shared during whelping and postpartum, the trust bond built during these times is even greater than the hunting partnership which is the other real light that shines between us. 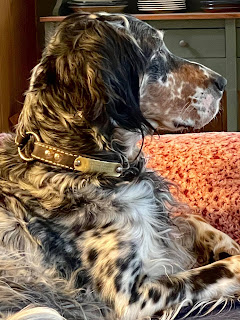 Firelight has been gifted once again with an easy whelping and my eighth generation of healthy, robust of setter puppies is here.  I call them The Milk Drunks. They really don’t leave the milk bar until they roll off with overfull bellies. 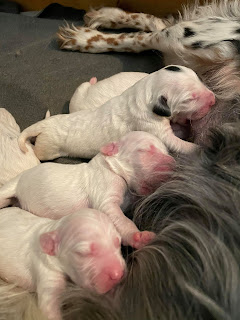 Annie has thrown her switch from a bit of fast-footed wild child to doting mother.  I have to unplug The Drunks just to get her to eat one of her multiple dinners or to stretch her legs outside.  Once out she will take a quick token lap around the yard, check on the grouse who seems to be nesting just beyond the back fence, and then comes trotting back to the door. 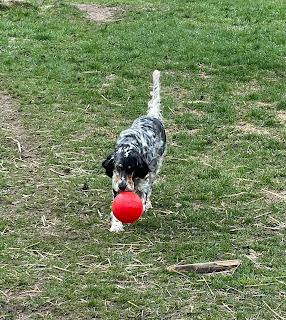 As usual with litters here, sleep for me has been at a minimum. Although Annie blessed me with a daylight whelping there were the long hours of restless panting the night prior. I had snuck in a couple of naps on the sofa with her tucked tight against me. That day began abruptly with a wet warmth on my leg as her water broke.  I was thankful for my Girl Scout-ness of having placed a waterproof cover over the new sofa.

My dear friend Paul quickly answered the expected ring on his phone at 5:30 am; he arrived at the house 15 minutes before the first puppy. As I jotted down the time and gender of the pup we laughed about the last whelping we did together where we lost count and were panic-stricken as we checked every towel, corner and even the laundry for a pup that we were certain had arrived but had not.

Annie wasted no time and in two hours we had a nice litter. She then rested but it was obvious that there was another pup to come. An hour later I had barely stepped out of the room to get a tea when I heard my name. I ran in to find Paul holding onto a fat-bottomed girl pup, helping to ease her into the world.  Gen 8, Firelight Setters:  present and accounted for! 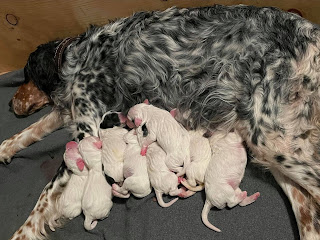 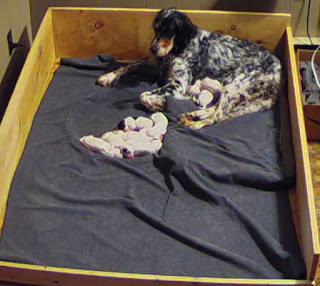 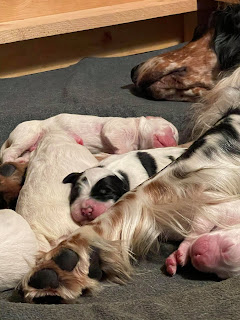 Posted by Firelight Reflections at 10:03 PM