The Tail That Saved My Hat

"Your hat is safe" was the title to the email.  Months prior I had sold a pup to an avid grouse and woodcock hunter and as often happens we discussed my personal preference (okay, okay, it borders on a fetish) for just the right tail position in my dogs' points. I want 10:00 - 11:00, the straighter the better.

When this guys' pup was about 5 months old he sent me photos from his pup's bird intro with pen raised quail stuffed into the edge of a field somewhere.  She was standing "on point" but her tail was low, below her topline, and her posture lacked intensity.  The disappointment could be heard through his written word as he mumbled something about tail position not really mattering as much as her nose, holding birds etc.  I replied, "wild birds only from here on and I will eat my hat if that tail doesn't come up.  A lot."

Fall and hunting season arrived and I smiled as I saw that email  I opened it to see a photo of the youngster pointing a grouse with lovely intensity and a nice high tail.

With my dogs, I'm not concerned with puppy style. I'm in it for the end product, the intelligent, stylish bird dog who has developed through good, fun, natural exposure. Keep your hands off, remain silent and let wild birds be the teacher.  Grouse or quail or Huns as teachers never depress a pups style, they only amp it up.

Following are three examples of Firelights as pups on pen birds for their bird/gun intro and then the same dog as an adult after letting wild birds be the only teacher thereafter.  After all, we Firelights don't eat our caps;  we let Nature put a feather in them! 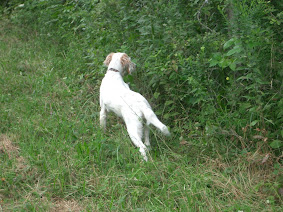 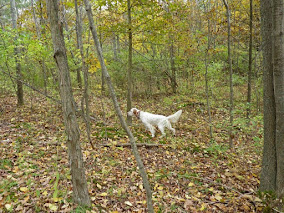 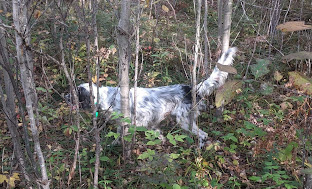 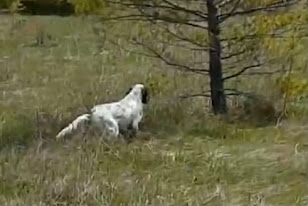 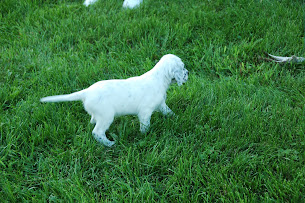 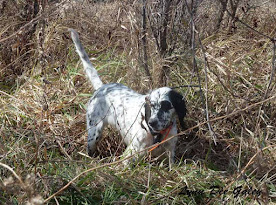 Posted by Firelight Reflections at 5:16 PM