An Athlete on Spring Break 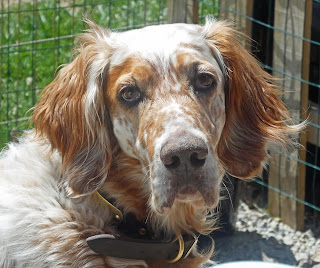 At this writing, Firelight Seth is vacationing on the “Rushcreek Riviera” here on my southern Ohio farm.  OK.  “Vacation” may be a misnomer.  Maybe it’s more like a hormonal quarantine as things “heat up” at Firelight Central.

We have learned that when Lynn Dee’s setter harem cycles into season, Seth’s desire to sire can get the better of him, reminding me of my Great Uncle Willie favorite aphorism, “Sex makes fools of us all.”

This may explain in part why Uncle Willie was nearly 80 years a bachelor.

However, it rings sadly true with my pal Seth.  The prospect of adding his mooning and moaning to the circus of Firelight Annie’s litter just now starting to open their eyes, trundle about, and climb the walls of their whelping box meant it was time for Seth to head south for the duration. 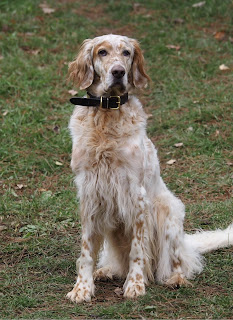 When Seth visited last, he was recovering from a tough run of circumstances with another owner ( http://www.longhuntersrest.com/gone-to-the-dogs/soul-food ).   He needed bathed and fed.  He needed to find his legs after months, kennel-bound.  He needed his faith in people restored.

By the end of his first stay, he was on his way.  In terms of performance, he made a deep impression with powerful, intelligent casts, his intensity on point, and his unquenchable urge to please. His rehab with people?  Never a question, from the groomer to the vet to anyone he met.  He came back for this recent board 15 lbs. heavier, light years more confident, and an English setter in his absolute physical prime.

Seth sports an athlete’s frame.  He is a shorter-coupled, physically balanced dog with plenty of leg and an uncommon way of going:  cat footed, nimble, and collected.  He laces more open cover with long, reaching strides and virtually punishes the nastier stuff with a strength and commitment made possible by his sturdy physique and refurbished mind.  Seth has found birds in the thick and thorny, and he will flat tear it apart to find them.

Seth's tail set is high enough to give him reach and push with his back end, an underestimated aspect of functional conformation.  His straight, shorter tail cracks when he works and mark a just-right-for-me 10 o'clock angle when he goes solid on point. 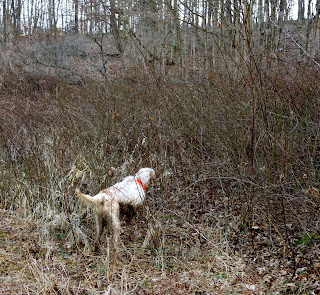 This dog could come off a couple weeks of Montana prairie hunting and be an absolute beast, lean and sinewy with tough feet and the kind of bottom that only belongs to the great steeplechase horses.  If the plains grouse and partridge were in any kind of numbers, he’d also have something else: added conviction.  To wit, “If I keep pushing, good things will happen.” Such a dog gets around with an edge, a singular purpose - to find a bird to kill with his handler/partner.

Some of us enamored with the classic look/demeanor of certain lines of English setter have sought bigger, slower dogs (1) for their picturesque appearance, and (2) for what we presume will be a closer working, more manageable hunting partner. Surely personal taste and sense of how a hunt should be conducted factor in here, but for my money, I believe we are wide of the mark if we are not constantly on the scout for bloodstock with both “The Look,” and what I might call “Intelligent Burn.” 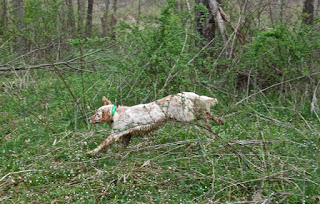 In class pointing dog work, savvy speed kills.   I value the dog with the innate physical tools to cover more ground more quickly, more purposely, in an “Intelligent Burn” - hunting with tractable initiative to likely cover in partnership with the gun.  A cagey dog who abruptly goes from 60 to 0 and slams into her points (rather than snuffling and checking and double-checking and then melting into a stand) is going to set more game for the Gun.  Those Wham-Bam-Shoot-It-Ma’am points leave birds knowing not whether to hunker or haul tail feathers.  Often enough, “hunker” is the choice, giving the Gun a sporting chance to flush. 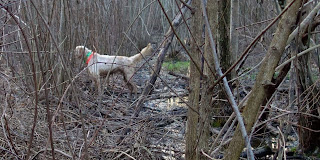 Saints preserve us from hunting behind some harum-scarum splatterninny careening wild through the woods.  It's a Bird Dog (in caps) we're after, a cool running predator who works to the cover and for the Gun...even if it is between bouts of the lovesick blues. 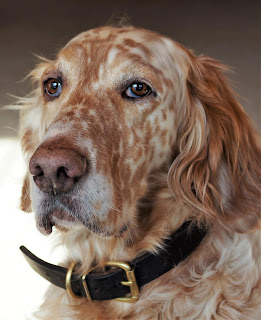 Posted by Randy Lawrence at 4:44 PM