by Randy Lawrence
I do not remember my first grouse shot over a bird dog's point.  All I know is that it was a long time coming.

I went to the dogs at age 27.  It's important to note that until then, I'd been squirrel and rabbit hunting maybe a dozen times.  I had never been bird hunting, never seen a pointing dog work.  In fact, the first and only gun dog I'd been around, growing up, was a Louisiana Delta Labrador in exile, here in Ohio only because his human was in on our brief oil boom in the mid-60's.

The dog repeatedly ran away from his yard in a nearby subdivision because he loved to swim in the big cement cattle trough we kept for our milk cows. I only knew he was a gun dog because the man in the wide black cowboy hat who talked like Justin Wilson kept coming to get "Blackie." Every time he visited, he bragged about the ducks he and Blackie shot "back home" before loading the dog into a shiny new diesel pickup and rumbling away.

I got slower and slower about calling Mr. Big Hat Ragsdale to report Blackie AWOL.  After all, the big dog loved to ride in the front of our beat up grain truck with my dad when he took a load of ear corn to town to be ground into cow feed.  Blackie was the only dog afforded that privilege until the pointer Riley 35 years later.

Dad would stand talking to the dusty feed mill workers while dumping our corn into the churning trench augers.   Blackie always leaned out the window and wagged his tail, hoping someone - anyone - would have time to offer an ear scratch.  Inevitably, somebody new would ask, "Is that a full blood Labrador?”

That's when my dad would pounce.  "He's full of blood alright." 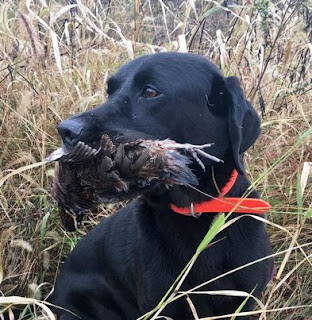 Whenever Blackie and I were alone, waiting on Mr. Ragsdale to come fetch him, I would wrap my arms around the Lab's burly chest and bury my face behind his silky ears.  Blackie always smelled musky, very different from our farm dogs.  Well...musky, with the slight cachet of cow trough algae.

Fast forward nearly two decades, and I'm teaching, I am coaching, but something is still missing.  I accepted an invitation to spend a week on a shooting preserve.  Every morning, I raptly watched my cousin train English Setters, German Shorthairs, Brittany Spaniels (in those days), English Pointers, and Gordon Setters.  I came home burning up with a fever for hunting over a full-blooded gun dog of my own

During my school lunch hour,  I would slip out of the cigarette smoke and constant chatter of the teachers' lounge and study the dog ads in the back of the outdoor magazines.  It was a while before I nerved up enough to call a man in Michigan and reserve an English setter puppy "from grouse dog lines."

I did this because my new brother-in-law and his brother Lyle talked endlessly about jump shooting ruffed grouse near their hunting cabin in West Virginia.  I figured that if I had a dog "from grouse dog lines," maybe they'd invite me to go grouse hunting.

But while waiting on my puppy to be born, I decided I needed a shotgun.  I still had the single shot, hammer 20-gauge my parents had reluctantly purchased for my 17th birthday.  But a careful survey showed neither Ted Trueblood nor Bob Brister nor George Bird Evans, Burt Spiller, or Tap Tapply toted a gun like that through the grouse woods.

I settled for a second hand Savage 330 over-under from the village gunshop (a) because it was made in Italy, (b) I knew Italian shotguns were good but  I couldn't afford a Beretta, and (c) I didn't know where in the world to find a three-shot, 12-gauge Win-Lite Model 59 autoloader that author Frank Woolner, in my library copy of Grouse and Grouse Shooting, touted as the penultimate grouse killing weapon. 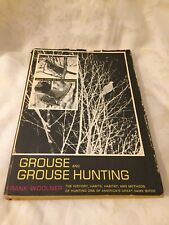 I studied Woolner's book like it was the Torah. Frank had lopped the gun's fiberglass barrel to make a 23-inch cylinder. He sliced off the pistol grip, then circumsized the forearm to make the little gun even lighter to carry and faster to bring into play.

Fifty-one years after the publication of Grouse and Grouse Hunting, shooters still rhapsodize about a "Woolnerized" Model 59. But back then, I didn't think I was up to all of that DIY surgery, though I was totally on board with the "single sighting plane" of Woolner's autoloading shotgun.

"Single sighting plane" was a concept I had pulled from a Gene Hill essay. The expression posited that the narrow reference point of one barrel made for more precise alignment between gun and target.

Never mind that wingshooters don't "sight," nor even register the barrel(s) other than as a peripheral blur.   One barrel or two, practically speaking, is irrelevant.  But there I was, a fledgling bird gunner, looking for an edge. Gene Hill wrote it.  I believed it.  That settled it.

Thankfully, that Savage 330 sported a "single sighting plane." I put the $300 double gun on lay-away and paid on it every time my teacher's check hit the bank.  I had my puppy endlessly pointing a wing on a string before I had my first bird gun paid off. 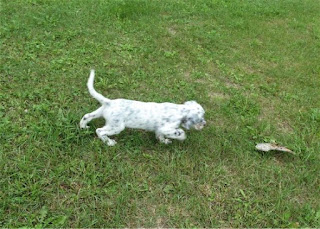 By the time I had a dog and gun of my own, Lyle had caught the bug, too.  He bought a well-started pointer with the big money he made driving a tow motor at Honda. We began making the five hour round trips to southeastern Ohio and into West Virginia together.

Lyle and I quickly learned that shooting grouse only over a green dog's points meant that we wouldn't shoot very many (read "maybe not any")  ...and that was unacceptable to both of us.  What's the point of going grouse hunting except to kill grouse and bring them home and spread their fans to astound the flatlanders before overcooking them in cream of mushroom soup and pretending they are delicious?

I'm Ok with not remembering the first grouse I killed with that clunky Italian-made Savage gun.  All I know is that the bird wasn't sitting in a tree.  Gene Hill had written such practices were not sporting. 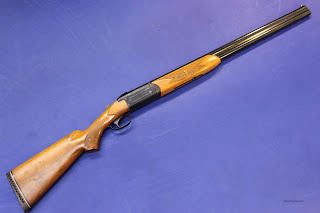 But I am sad that I do not remember the first grouse I killed over a point.  I'm certain it wasn't over Drummer, who, under my over-wrought training and handling, would lie down on point and did not hold a grouse for the gun for several long seasons.  I imagine it was over Lyle's pointer, and I'm certain I didn't believe it when I saw the bird tumble.

I can safely say that I probably raced Lyle's cretinous jaws-of-steel dog to the fall, and that my friend probably had to listen to my play by play on a loop during the long drive back north.  Garrulous golfers at the 19th hole have nothing on wingshooters.

Even more certain am I that once I was home, I spread that bird's tail fan over and over, holding it for Drummer to smell like a bloodhound owner sharing a sniff of a fugitive's underwear with his trusty canine cohort.

Trust me when I say that when nobody was looking, I surely buried my own nose in those blue black ruff feathers.  I'm sure they smelled a bit musky...with not even a hint of cow trough algae. 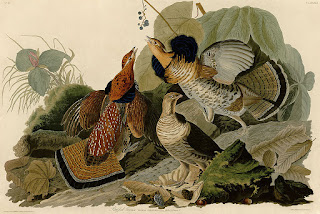